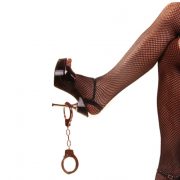 Theo was my introduction to the world of puppy humiliation play.

Theo wanted me to give him some puppy humiliation play; i.e., humiliate him while treating him like a puppy. But, I didn’t know it when we first met.

Sometimes you get pathetic men who hover around you like a gnat. I’m sure you’ve all known a guy like this. Hell, probably, if you’re reading this blog, by the title, you are the guy like this.

But in this story, my guy is named Theo. He was pathetic. His displays of affection started with attempts at coffee and wanting to give me his notes. Then, he moved onto poems and he even wrote me a song. Despite my telling him I wasn’t interested, he didn’t get the hint.

When a woman is pushed to her limits, she’s certain to break. And I was trying to figure out the best way to break Theo before his attention broke me.

Still, he followed me around. When I went to lunch, he was across the room. When I got on the bus, he sat right at the door, staring at me with his wide eyes. He hadn’t yet gotten the fact that I despised him. Yet, months of silence and glares only seemed to make him try harder. He never even gave me a hint he wanted puppy humiliation play; he was just a guy following me around aimlessly and didn’t tell me what he wanted.

So, I needed to let him know how I felt about him. He was a worm to me, and I wanted nothing to do with him.

Of course, Theo continued to harass me for my attention. Thus, it all came to a head during a journalism project later in the semester. My group and I, which Theo was not a part of, were doing a project on the layout design of newspapers. My group was mostly male, with one girl. We were laughing and flirting with each other while doing the project. Though I hadn’t noticed Theo’s presence watching me, the guys had. Finally, one snapped and shouted.

Theo. Once called out, he approached the table, shaking. He whispered something. Since I couldn’t hear, I held my hand up to my ear and gestured at him to repeat himself. “Y-you’d have more fun with me.”

“Unlikely,” I snapped. “What, do you want to make out with one of those guys?”

Unsurprisingly, Theo turned bright red and left. So, I didn’t think anything of it. Our group continued with our newspaper project and he didn’t bother us.

After a few hours, the project was done. Save for one girl, the members of my group had left.

So, soon after they left, Theo came back to me at the table, his face still red. I glared at him, and he seemed to shrink. “He’s like a pathetic little puppy,” I told her. “Barking at all the guys around me, but then wants all my attention.”

“Hah,” my female project partner stated. “Look, he’s probably not even house trained. Bet if he wants to get your attention, he’ll piss himself.”

Theo whined. Literally, he whined, like a pathetic dog. I scoffed. What, did he want some puppy humiliation play, for example? Did he crave to be underneath my heel?

Suddenly, my partner was jumping up out of her seat.

Disgusted, my project partner ran off, probably to tell the head librarian or security. This left me and him. Since he acted like a puppy, I decided I’d punish him like one. I stared at him while I rolled up the newspaper in my hand.

“Come here,” I commanded. And he took a step.

Shaking, Theo nodded, understanding my meaning. He got onto all fours and began to crawl towards me. Plus, his pants were still soaked. As he crawled, I heard whispers around us. When he heard them, they only served to make his face redder.

Carefully he turned his head upward. His face was red. His eyes grew wet and shiny. The stench of piss reached my nose. Pathetic.

I whacked him in the face with the newspaper. “Bad dog,” I scolded him. Again, I hit him. Just like before, he whimpered, a high pitched whine in the back of his throat.

Here’s the best thing. Theo’s pathetic cock? It rubbed against his pants each time I hit his face since he was flinching so hard. Finally, he came in his pants, right there in the library, in a puddle of his own piss, in front of the head librarian and a bunch of people who had crowded around us.

Pathetic doesn’t even begin to cover it.

Are you a naughty puppy? Have some humiliation phone sex of your own with me!!