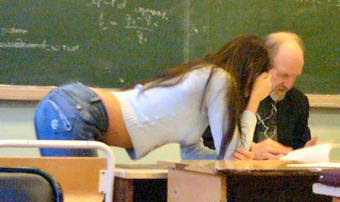 I’ve been in college a while now but only just noticed that the tiered seats in the lecture theater are at a surprisingly good angle. If you sit at the teachers desk and look at the students in the 3rd row you can see perfectly up the skirts of my fellow female classmates. I only discovered this when I sat down at Mr. Kinney’s desk to staple an assignment together, looked up when I heard someone drop a textbook and saw a flash of Britney’s white panties. I wondered how many times Mr. Kinney had sat here, looking for hints of skin and getting hard. I thought it might boost my grades if I gave him a thrill so the next day I didn’t bother to wear any panties.
I grabbed a seat in the 3rd row that was directly in front of his desk and waited for him to begin class. As he was talking I slouched down and parted my legs. I jiggled my foot, trying to get his attention. I wasn’t sure if it worked so when he sat at his desk I reached down and pretended to scratch my knee which just so happened to hike up my skirt. I then leaned back, spread my legs further apart and heard my mother’s voice in my head telling me to cross my legs and sit like a lady. I ignored her like a good daughter would and hoped Mr. Kinney didn’t need glasses.
When class was over I grabbed my bag and was about to get up when Mr. Kinney said he wanted to talk to me. I stayed where I was and when all of the other students had left Mr. Kinney beckoned me to his desk. I went over to him and he told me that he was very disappointed in me. I was distracting him during class and it seems like I was having problems focusing on what needed to be done. For example: I had forgotten to put panties on this morning. I told him I was very sorry and that I’d try to behave better from now on. Mr. Kinney told me that he accepted my apology but that I needed to take care of the problem I had caused.
He stood up, closed the classroom door and came up behind me. He put his arms around me and reached down, holding the bottom of my skirt. I leaned back and I could feel his hard on pressing against me. He pulled my skirt up and pushed me forward so I was bent over his desk. He kicked my legs apart and I heard a zipper go down. He put his hands on my hips and I felt his dick touch me. I leaned down lower, opening myself up for him, and he pushed himself inside me with one quick shove. He was rough, pounding my tight little pussy so hard that my legs were banging against the edge of the desk. I love it rough and I let myself relax, my body moving to his thrusts. He started grunting and moving quicker. I knew he was about to cum and I clenched my pussy muscles around him. He groaned and I felt his cum fill me.He pulled out of me and told me that I had to stay after class for the rest of the week. I stood up, fixed my skirt as his cum dripped down my thighs and told him that was fine by me.
If you want to hear more stories about College Sluts give one of our Phone Sex Girls a call tonight!