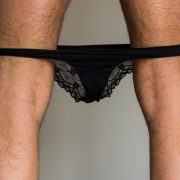 I met Harry through my girlfriend Gina, who was Thelma to my Louise until she died. She’s a whole other crazy, kinky fucking story. But the first time meeting Harry, he was drunk off his ass on vodka, talking about lingerie. I thought he was just a kinky pervert wanting to talk sex. That is until he pulled his britches down, exposing his pretty little pink panties. We could tell he had a little dick. And leave it to me to point that fact out in front of everyone as we roared with laughter. I told him to bend the fuck over and spanked his pink panty-covered ass. My new perverted friend seemed to be butt hurt, claiming the panties were his deceased wife’s.

First words to Gina were, “awww, that poor man misses his wife so much he wears her panties.”

Gina told me, “no, that’s bullshit, he bought those at Walmart!” My new perverted friend just fucking lied to me, making me sympathize for nothing! From that day forward I liked Harry. He would make me laugh with his dirty jokes until I’d come close to pissing my pants. Informing me, he’d have no problems sucking the piss out of my panties. I’d tease him ruthlessly, exposing my bikini strings, or bending over, letting him take a look at my full tits.

My perverted friend would constantly tell me “I want a pair of your panties Fallon.”

Would your husband mind if I jerked off with a pair of them? No, my old man wouldn’t give a fuck. I to Dave over to meet my new perverted friend Harry. And of course in Harry’s fashion, he walked out in a pair of red bikini cut panties and a t-shirt. My husband laughed, saying, hey Harry, I’m Fallon’s husband. Harry replied, Oh hell, you caught me in my dead wife’s undergarments. Sorry about that. Dave laughed, saying, you wear them well Harry. He liked my husband from that point on. Harry has on filter, he says what he wants when he wants. And we love it!

Harry was relentless when it came to getting a pair of my panties.

I told my perverted friend, dude, you couldn’t afford a pair of my cum soaked panties. He would laugh, telling me he’ll steal them from my dirty hamper the next time he visits. Fucker had me watching him like a hawk when he’d come over. I’m not going to let it be that easy for Harry! Dave called me one day telling me to empty out my lingerie armoire. I asked him, well what the fuck am I to do with 15 years of lingerie? He laughs jokingly, telling me to give it to Harry. Ahhh, Harry would love this sexy lingerie I have…but I’m not going to give it to him for nothing!

As much as I loved Harry, he’s not getting my lingerie easily!

To be sure we were on the same page, I asked Harry if he’d want my sexy used lingerie.  He immediately agreed to do whatever he had to for the bag of goodies. I took a huge bag of Fredricks, Victoria Secrets & Macy’s lingerie. Of course his little baby dick became hard immediately! I dumped everything out on his bed, watching him get more excited. Grabbing piece by piece, putting outfits up to his body, twirling around like the little sissy bitch. Fucking with him, I started tossing everything back in the bag. Told my little bitch in order to get this bag of slutty goodies, you’re going to do exactly as I say. Immediately instructing him to pull his jean shorts down.

Exposing his tiny blue thong panties squeezing around his micro dick and balls.

Now stroke bitch…hand fuck that good for nothing penis. Fuck that asshole goddammit!

Suck it like a dick fucker. That’s it, show me what a cock craving whore you are, haha. He was putty in my hands! Overall, Harry was too much fun!