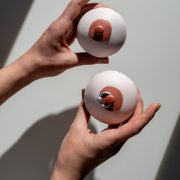 I finally got my perky nipples pierced!

So, I had decided to get both of my perky nipples pierced just the other day. And, I had spent the entire day agonizing over where to go. I finally chose one of the seedier looking tattoo and piercing shops in my college town. Surprise fills my face! I find out that I am the only one here tonight. A very hot and professional worker named Jerry was working at the shop that night.

We walked back to a private part of the parlor and made small chit chat on the way. When the door closes, he asks me to take my shirt off. Jerry loved seeing my perky tits, which made me all the more excited.

I bit my lip as he was inspecting my nipples, and I think he must have noticed!

Lucky me, because he started to rub and twist my nipples. After that, my nipples got so hard and I began to breathe heavier and start to moan softly. I felt Jerry’s other hand slowly start to move down my belly and into my pants. I wonder what he must have thought when he realized I was not wearing any panties at all.

Jerry quickly found my ever wetter pussy and began gently rubbing and twirling his fingers around my clit, just like I was a little depraved school girl. I only knew this man by his name tag and within 5 minutes he was already beginning to finger my pussy and play with my nipples.

So I began to reach for his belt and undo his pants. I pulled out his cock and it was absolutely huge! At least seven full inches. As I began to stroke his cock, I felt his fingers move from my clit and inside my pussy, quickly finding their way to my gspot. It felt so good. I began to think all about how much that piercing was going to hurt. God, I love my nipples in pain!

You want to have some fun with one of the best phone sex girls? Give me a ring!