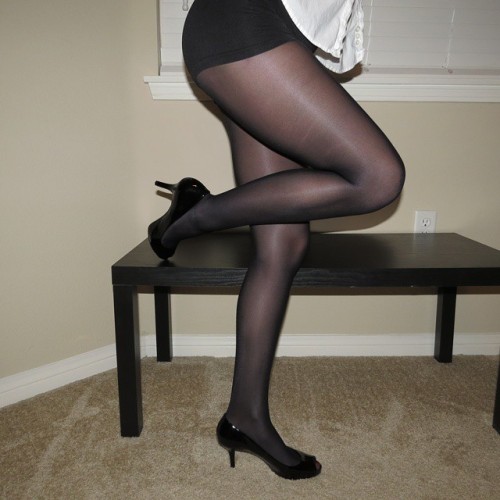 Aiden has a huge pantyhose Fetish.

I might have been a bit too rough with his Fetish while I was smothering Aiden because his face was red and he was panting. Ooops!

Sitting beside him I threw my legs into his lap, resting them just above his dick. He was rock hard and there was a ton of pre-cum leaking out of him and dribbling down his head, making it all wet and shiny.

Leaning back on my elbows I lifted a foot, putting it just above his dick. He stared at it, wanting me to touch him but keeping quiet so he wouldn’t piss me off.

I wiggled my toes in my pantyhose then put my big toe on the head of his dick.

Holding it there for a second I felt the pre-cum soak into my pantyhose. Not exactly hardcore sex, but I loved it.

I arched my foot and pressed my toes into his balls as he wrapped a hand around his dick. He pumped it hard but smooth and I kneaded my toes into him. I took my foot off him and his face fell, I nearly laughed because he thought I was punishing him. Ha! I pushed his legs apart and settled between his knees, leaning on my elbows again.

I put both of my feet on the tops of his thighs and slid them back and forth, so close to his dick that he was jerking non-stop. “Is this what you want?” I asked as I slowly slid my feet closer and closer, watching as his chest moved with his heavy breathing.

Pressing my feet around the base of his dick his fist-bumped against them as he kept going.

He loved it and I tried to make it good for him. His hand was big and warm around me as he started sliding it up and down and I kneaded my soles into his dick as his strokes got quicker.

When he was done I rubbed my foot over his sensitive head and he made the sexiest noise ever, God I’m so not done with him yet.