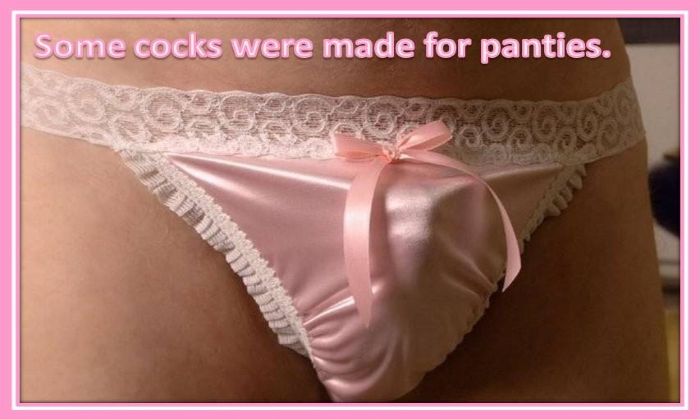 It isn’t surprising to me that he is experimenting now that he is a college man. Following in his father’s footsteps turns out he likes satin panties. He is my panty-boy grandson.

Back in his father’s college days, I would often catch him and his bestie during their secret panty-boy games. Anyway, they love putting on my panties or my daughter’s.

Then, tie themselves together with their cocks rubbing against each other. As if they are hostages of some bad guys. The idea is the bad guys will use the boys for their pleasure.

Now, here we are with a panty-boy grandson with his own games.

Although he is more mature than his father was in college. And, he is extremely creative and sexy about it. He has a fine collection of expensive lingerie.

He isn’t wearing his mom’s panties. Of course, he is playing with his roomie but his roomie is a girl. Yes, he has an apartment and rooms with a friend from home.

So, are our panty-boy grandson is venturing into his experimenting with women first. Now, he did say she is bringing over some guys to play with them this weekend.

He loves to be with men and women so, he will have a blast.

It is just new for him to be the one in the lingerie. In the past, he was used to the women in our family wearing sexy bras and panty sets. Indeed, that may be what got him into this fetish.

Or, he saw his mom and dad playing. Of course, his dad does still have some male friends that come over and play panty-boy games too. Perhaps, our panty-boy grandson wasn’t asleep and watched the fun.

Either way,  he has found his way to the fetish and is having fun with it. Today he came by and was modeling his LaPerla lingerie for granny. I have to say, I am impressed with his taste.

My panty-boy grandson knows his lingerie and this grandma taught him well!

It does my heart good to see him so happy with this fetish. We all have different things that turn us on. And, he didn’t show much interest in anything specific before now.

He was telling me how much fun it is when he and Jennifer are playing their games. She is dominant and he is her submissive. He will dress in sexy lingerie and worship her.

Then, our panty-boy grandson will do as he is told. Currently, that entails whatever Jennifer desires. Which is just between them right now. As of this weekend, he will be taking cock.

Alex told me she will have him suck her toes first.

After that, he will work his way up her legs. She loves the way he gives her oral. So, he will eat her pussy and ass until she climaxes all over his face. Then, she will have him lay on his back or get doggie style.

He said it all depends on her mood. I know exactly what he is talking about because I am just like her. Then, she uses her strapons. Pulling his pretty panties to the side.

Jennifer starts sliding that big rod into my panty boy grandson’s man pussy. He said he loves it when he is on his back looking into her eyes. Sometimes she strokes him and other times he does it.

So, reader, are you a panty boy? Want to tell me about it? Call me for some hot GILF phone sex and let’s chat!

Seriously, NO LIMITS! I am a midwestern lady that loves everything kinky! I grew up in the country and landed in the city. Growing up in a family-play clan, I am open to so many naughty things. I am experienced and love to try all things sexual. Whether you want a loving granny or dominant mistress, together we can find our perfect adventure. 1-888-851-1543