Giving my Slave a Pain Orgasm With Caning. 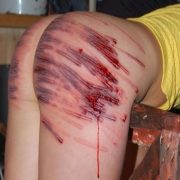 It is definitely possible to give a person a pain orgasm.

I had the pleasure of experiencing, under my hand, a pain orgasm. When a sub lets you take them so far on their journey of pain, that they actually orgasm, magic happens. It is not only satisfying but genuinely quite hilarious. It’s quite humiliating and pathetic for them. Nothing says ownership, like forcing someone to orgasm under your sadistic brutality. Nothing also says ownership like black and blue all over. Keeping safety regards in mind, of course. I don’t possess a whole lot of sex furniture, unfortunately. However, I found that my coffee table serves me well when I want someone to really feel beneath me. I found myself the perfect little masochist, online, of course.

She is quite the eager little pain slut and lets me try out all of my fun little experiments on her. You would never guess that she was a little masochist. Hilariously, she appeared as dark and masochistic as I do dark and sadistic. She had a sweet, little, innocent demeanor, not unlike myself. She had short, curly brown hair and must’ve weighed around ninety pounds, same as me. Also, she was incredibly soft-spoken and had a whiney little bratty side to her. A little ball of cute! She took me that she had no limits and that she really wanted to push herself and feel pain. I told her my limits, which were relatively high on the extreme scale. Things like broken bones or cannibalism were not my forte.

I told her to strip and lay belly flat against the coffee table, and her legs stood tall.

Her lower belly peeked off of the table. Her arms, above her head, were fastened there, to both the legs of my coffee table. Immobile, clasped, and centered. This way, she could separate from the table if I wanted to toy with her front, but collapse into it after enduring a certain amount of pain. I began immediately with a riding crop. I struck underneath each of her tits several times while pinching her nipples and holding the skin taut. Then, I struck her all over the shoulders. This was just the warm-up. I warmed up her ass too until she turned a nice pink. Then, I struck her clit with it. Then I literally beat her clit with the riding crop until she looked like she might cum.

Each layer, the span of my strokes, shortened a bit. I stopped and fingered her pussy, scaring her by sliding the cane between her legs. I pressed into her G-spot with slow, deliberate strokes. Once I felt her begin to rise in arousal, I pulled my fingers out. I began to strike her in many swift, relentless strokes. Using all the strength in my right arm, I struck her relentlessly. First, she turned purple. Then dark red began to leak out of the wounds created. Points began to turn black, and she shook, cried, and gasped for air. Finally, she came. The cane set it off, but in the middle of her pain orgasm, I dropped the cane and fervently fingered her.

She squirted all over my hand and all over my coffee table. I had some serious disinfecting to do. Then, I cleaned her up the best that I could and covered her ass in a light layer of Neosporin. I also stuffed a little gauze in her panties for cushion/absorption. We watched movies the rest of the night, with her lying on her side, in shock from having a pain orgasm.

Call me for fetish phone sex! Read my blog to hear about my side whore slave bitch!