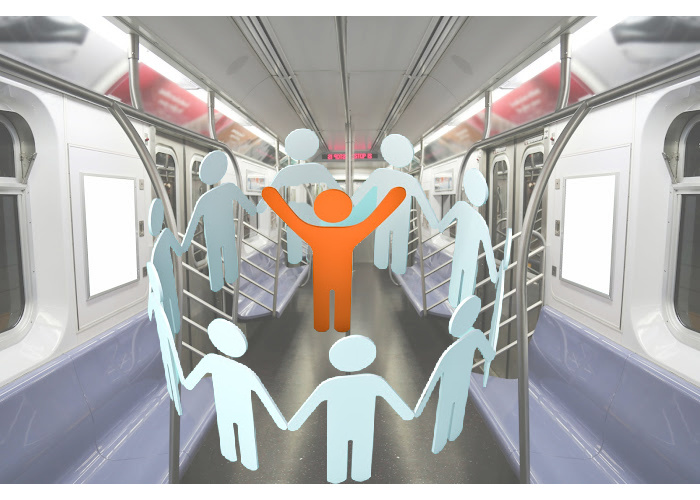 They say that New York City is the city that never sleeps.  I guess that was before the Corona Virus Pandemic.  I moved to New York because I knew no matter what job I had, I would always have transportation.  That all changed when the city was placed on house arrest to prevent the spread of the virus.  Instead of the trains running 24 hours per day, they were only open from 5 AM to midnight.  The mayor mandated that the trains be shut down to be cleaned and sanitized during those hours.

I stood next to the pole, looking down at what was happening beneath me, trying to figure out what or who I should do first.  Once they realized I was there, they stopped touching each other, and they all started touching me.  I had hands-on every part of my body, and before I knew it, I was naked on the floor of the subway car.

My mind wandered as I tried to figure out if I had ever felt such pleasure.  Before I could think of an answer, I began to feel someone licking my pussy most sensually.  I sat up slightly, and I saw that it was the beautiful woman that grabbed me by the hand and led me here.  She kissed every part of my pussy with these soft, gentle pecks, and she used her teeth to tug on my clit and labia, creating the most tantalizing feeling all over my body.  Just when I thought I was going to cum, she stopped; they all stopped touching me!  Little did I know they were preparing me for the BIG FINALE!

Was he really there?

I opened my eyes, and standing above me was a man so tall that he could not stand up straight in the train car; he was slightly hunched over.  In his hand was the biggest cock that I had ever seen, and it was as hard as a tree branch.  He knelt, grabbed me by my hips, and thrust his mammoth cock into my sweet honey pot that was already dripping.  He stroked his cock so deep and hard that I was unable to make any noises.  As a result, I could only look at him with lust in my eyes and a mouth wide open. This handsome man pounded my juicy slit for what seemed like forever.  I came over and over, covering his schlong with the essence of my pussy.

Finally, I thought he was going to explode and shower me with his man sauce, but a voice came over the train intercom — “The train stations will open in fifteen minutes.  Finish your current tasks immediately.  The trains will begin running again in ten!”

Damn, I didn’t want it to end!

With the snap of a finger, the train car was empty!  I sat up and looked around, and I was all alone again.  The only thing that remained was me and my clothes piled in the corner.  I gathered my clothes and quickly got dressed.  While I waited for the train to begin moving,  I was still reeling from what had just happened!  Who were they?  Where did they come from, and where did they all go?  There was an orgy on the train, and I was the center of attention.  I can’t wait to call my favorite phone sex operator; they will never believe this story!

Did you enjoy this hot tale of erotica?  Read other blogs that I have written, like The Road to Glory — Behind the Glass Door!