Office Sex; I Got The Best Sex At The Office 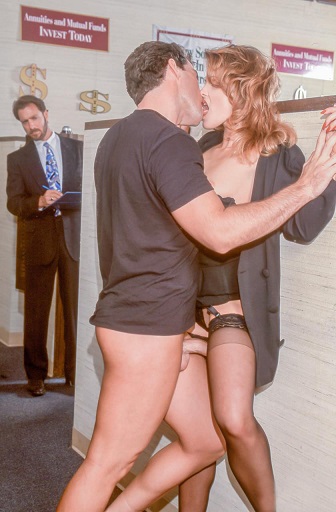 Office Sex Has To Be The Riskiest Sex

I’ve always been lucky when it came to coworkers. Some really good-looking guys have always worked in the same office that I do. I’ve been kind of naughty with a few of them as well. Fortunately, I never got caught. Some of them would fuck me in the restroom, the supply closet, on the boardroom table after hours. It’s a big office, and people are pretty absorbed in their own work. I’ve been carrying on with my latest fuck buddy at work for several months. He’s got a great cock, and he always makes me cum hard. I love to use my cock sucking skills with him. There’s a new man at work though, and he seems to be more observant. Which had me a bit worried, but I didn’t pay it too much mind. I should have. Office Sex is risky.

We were Caught In The Act

Last week I was fucking my coworker after hours in the conference room. The table in there is big and has lots of room. No one was supposed to be there. I thought I’d seen the last one leave, and we had a few hours until the nightly cleaning crew arrived. That’s why it was so perfectly convenient. We were right in the middle of fucking, and not holding back on our moans when the door opened. We froze.  And We couldn’t believe they had caught us in the act. I was on my back. My fuck buddy was balls deep in my pussy. We were both totally naked. I looked over his shoulder I’d been kissing and there he was, the new guy.

He Had A Smirk On His Face

He had this smirk on his face as he saw us there, frozen and not sure what to do. Then he stepped into the room and closed the door behind him. He promised to keep our secret if he could join us. That was sure the last thing I was expecting to hear him say! I thought he might be a troublemaker. Maybe he would want to get us fired just for the fun of it, as some might want to do. He walked towards us and unzipped his pants and took out his cock, which was also a good size. He came to where my head was and told me to suck it as I got fucked.

Some Variety Was Even Better

I certainly had not planned on this turn of events, but why not? He was an ok looking guy, his cock looked good, and maybe some variety might be nice. I opened my mouth and began to lick the head. My fuck buddy on top of me began to thrust again and resume fucking. Office sex had taken a fun and adventuresome turn with the addition of this new player. I looked up into his eyes as I sucked him. I could feel my pussy getting fucked oh so good by my other coworker. And I wrapped my legs around him and bucked my hips faster and faster. I soon came on his cock and then he shot his wad into me and soon withdrew and climbed off. The new guy said it was his turn now.

Two Was Better Than One Anytime

The best phone sex is with a girl that really has no limits!