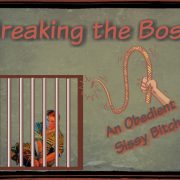 In an agonizing and impossible choice, all three men decided that boss-man would choose which cock went into both of his holes. The fun part was that he could also choose guy #3. He had so far had kept his dick in his pants and therefore its size a mystery. It could be even bigger or much smaller.

And does our captive boss get to find out about the size of cock #3? Well, you know what kind of story this is… Of course, he does!

Guy #1 was extremely gifted and a perfect choice

“Get on your hands and knees like an obedient sissy bitch,” Guy #1 ordered. “Please, don’t put that huge cock inside me,” boss man begged. “I don’t want it and it’s going to hurt me!” I think I saw tears start to come out of his eyes.  And I may have started to feel a bit of sympathy for him.  But then I realized how excited I was.  Excited at the thought of seeing that huge cock tear its way into boss man’s already well-used ass. Seriously, Guy #1 was extremely gifted and a perfect choice to make an obedient sissy bitch!

“Please at least use a condom,” whined boss man.  Guy #1 responded by spreading boss man’s ass cheeks wide.  Followed by rubbing his bare cock head up and down over his little puckered man vagina.  He seemed to be intentionally prolonging the time that our prisoner was in terror of the hell he was about to go through. Nice move Guy #1!

Finally, he let out a groan of pure pleasure.  He pushed a cock head the size of a tennis ball right into our obedient sissy bitch’s tight ass hole.  Boss man made no such pleasure noises but I did see his tears starting to puddle on the concrete floor underneath where he kept his head down and waited for the horror to end.  It was all he could do. But, strangely enough, I noticed another puddle on the floor. A puddle of pre-cum that was dribbling from his very erect little dick. What an interesting turn of events!

Meanwhile, on boss man’s other end, Guy #2 told him to open his mouth.  Boss man stupidly refused, and immediately a big hand pinched his nose closed. He had to open his mouth to breathe and immediately, the very sexy guy shoved his cock inside, a cock that was slightly larger than the one currently pounding our obedient sissy bitch’s ass.

And just as Brad had done earlier, he pushed his big cock down boss man’s throat and started using it to pleasure himself. This time, though, our little bitch took it much better than the first time.  He gagged much less and had learned pretty quickly to take cock into his throat deeper before starting to choke on it.

I was almost proud of our cock sucking obedient sissy bitch!

Guy #2 pushed his very large cock into boss man’s throat even deeper and harder than Brad had done.  But he had trained him well and our prisoner was now proving to be a very obedient sissy bitch! The ass fucking and face fucking went on for a while.  Eventually,  Guy #3 said that he wanted his turn at our victim.  And I could tell that boss man realized that he had made a terrible mistake when he saw him unzip his pants and take out a well below average size dick.

Finally, when I didn’t think that our abused boss could take any more, all three men pulled out and came all over boss man.  He looked quite relieved even though he was an exhausted, broken and sticky mess. Truly an obedient sissy slut!