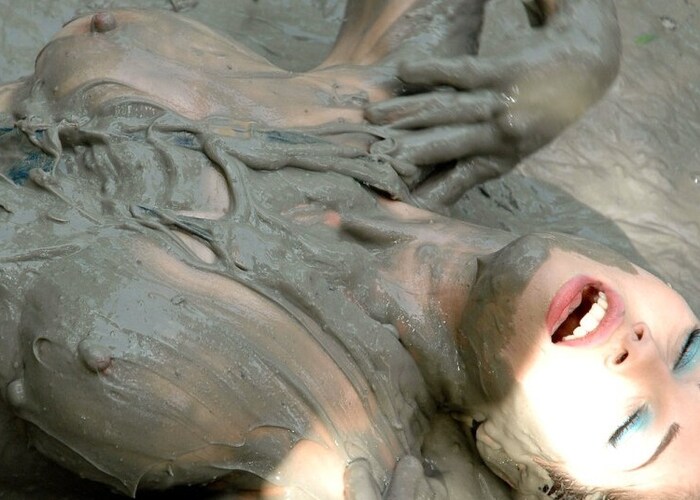 I’m not just a sweet sugar baby, I’m the type of girl who does not like to follow the rules. Would you expect anything less from me? So, when I heard the local bar was putting on a mud wrestling competition, I knew I would do anything to win. And, I was going to guarantee my best friend and I took home the cash prize. Even if that meant breaking the no-nudity rule and turning it into a nude mud wrestling show for all the lucky patrons.

How could I possibly resist the temptation? Girls wrestling is hot just on its own. I think everyone watching was hoping to see some titties pop out. So, why not give them everything they wanted and more. The two who put on the best show were going to win and our nude mud wrestling was bound to be the best.

We both wore matching outfits: tiny red shorts and very thin white tank tops. We kind of looked like Hooters girls, but way hotter because we were more than willing to strip.  Of course, we didn’t wear any panties and no bras. After we watched some pathetic fake fighting in the mud from little bitches, it was finally our turn to put on our nude mud wrestling show. Everyone so far followed the lame rules. The guys were kind of riled up but they had no idea they were about to be rock hard.

We both walked over to the pool of mud, our big titties bouncing as we strutted over. The guys cheered loudly when they noticed how see-through our tops were. We stepped into the cold mud and I immediately picked up a big handful of mud and threw it in my friend’s face. I knew this would truly piss her off. The crowd cheered for me. I wanted it to be a good show, after all. Just like I predicted she gasped, shocked and ready for revenge.

She lunged at me hard and knocked me down, I was on my back sinking in the mud. Then she straddled me and grabbed at my tank top. She pulled down and it easily tore open down my chest. My big bare titties were completely exposed. The crowd was going wild for this nude mud wrestling show!

Giving The Crowd What They Want

I sat on my knees and removed my torn top, swung it over my head, and threw it into the crowd, muddy and all. Then I grabbed for her top and tore it down the middle, her big titties jiggling with the force of it. We both stood and tried to push each other to the ground but we were both equally strong. So, our big titties ended up bouncing and pressing against each other as we fought. The hardness of all the cocks in the room reached their peak at this point. I know, I could hear it in their excited cheers. I was going to give them a nude mud wrestling show!

I couldn’t knock her down, so I released myself from her grasp and pulled her little shorts off instead. Her bare ass and pussy were there for everyone to gawk at. She gladly stepped out of her shorts and threw them into the crowd as I did before, mocking me. I laughed and that’s when she was able to surprise me and push me down into the mud. We rolled around in it, taking turns over-powering each other in this nude mud wrestling show. I tried to crawl away at one point to get out from under her, that’s when she took the opportunity to grab me by the shorts and pull them off of me. Now we were both buck naked and the crowd was loving it.

Our nude mud wrestling show was such a hit, it was obvious who the winner would be. When the bell rang, we both helped each other wipe the mud from our naked bodies and took a bow for the crowd. Sometimes it pays to break the rules.

Wanna get dirty with me? Call me for filthy phone sex fun!