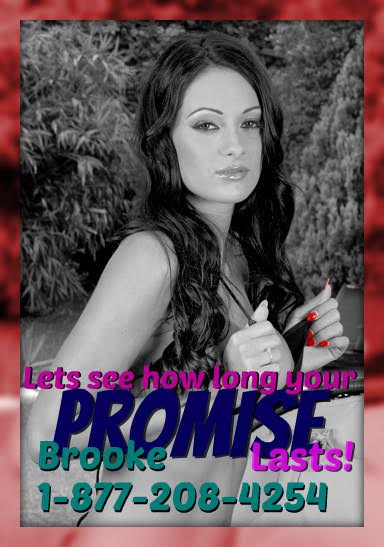 There is nothing I love more than a good challenge. One of the best things about being a fetish phone sex babe is the fact that I get to face challenges all the time. I get to break down walls and barriers and bring guys to a place they never thought they could go. Sometimes it takes a little erotic hypnosis, but I will do whatever it takes to make a man putty in my hands or really…his. HAHA I met a really sexy guy the other day at a coffee shop. We chatted for a bit but it wasn’t anything too steamy.

When I noticed that he was wearing a purity ring it made my pussy start to pulse in pleasure. He said it wasn’t that he was a virgin, just that he chose to be celibate and was waiting until he married Mrs. Right.

For days I brainwashed him, he was going to be mine, and he was going to feel the fighting urge deep down in his loins to give it to me. The next night he couldn’t take it anymore. He knocked at my door, it was like he was under a spell, but I guess it was a kind of spell since he was hypnotized to need my pussy. He walked into my apartment and immediately embraced me in a deep, passionate kiss. I demanded he pull out his cock, and he did. I ordered him to play with it. With his hand wrapped tightly around his shaft he began stroking. I could not help but chuckle a little as I realized how much influence I had over his mind.

I leaned back on my couch and spread my legs wide open. “Eat my pretty pussy like you are starving,” I commanded. He dove hungrily into my cunt. His tongue spiraled around my clit as he slurped up every drop of juice that I gave him. He couldn’t take it anymore; he stood up and grabbed a hold of my legs. Pulling my ass towards the edge of the couch he spread me wide open. Without any warning, he shoved every inch of himself into me. I moaned out and tossed my head back. It was a shame he decided to pledge himself to his lord, a cock this amazing deserved to be felt by the masses.

He plowed into me, pounding the tip of his dick against my g-spot.

He rocked his hips in such a way that told me he knew exactly what he was doing. The longer we fucked the rougher he got, placing his hand against the base of my throat he began to choke me which sent me over the edge! I started squirting all over his big dick as he edged closer to his own climax. He pulled out of my pussy and took me by the back of my hair shoving me onto his stiff, hard cock and started filling the back of my throat with his warm load. It was a lot too, a lot of pent up seamen that needed to be released. Sure, he had masturbated, but it had been a VERY long time since he’d had a woman’s legs wrapped tightly around him as he pounded into the velvety canal that gripped his cock like nothing else.

Being the sweet little catholic girl I was I figured that I would allow him to keep his promise. As he left my house I told him to call me when he got home. When he did I worked my mind magic and ordered him to forget me. I released him from the fact that he fucked me, but I knew I could still control his mind with my erotic hypnosis. When I wanted more I would get it, and his subconscious would have to obey every one of my commands! I know you want a taste of my sexy, hypnotic voice floating through your head. The things that I can make you do would surprise you….if I choose to let you remember them that is!!