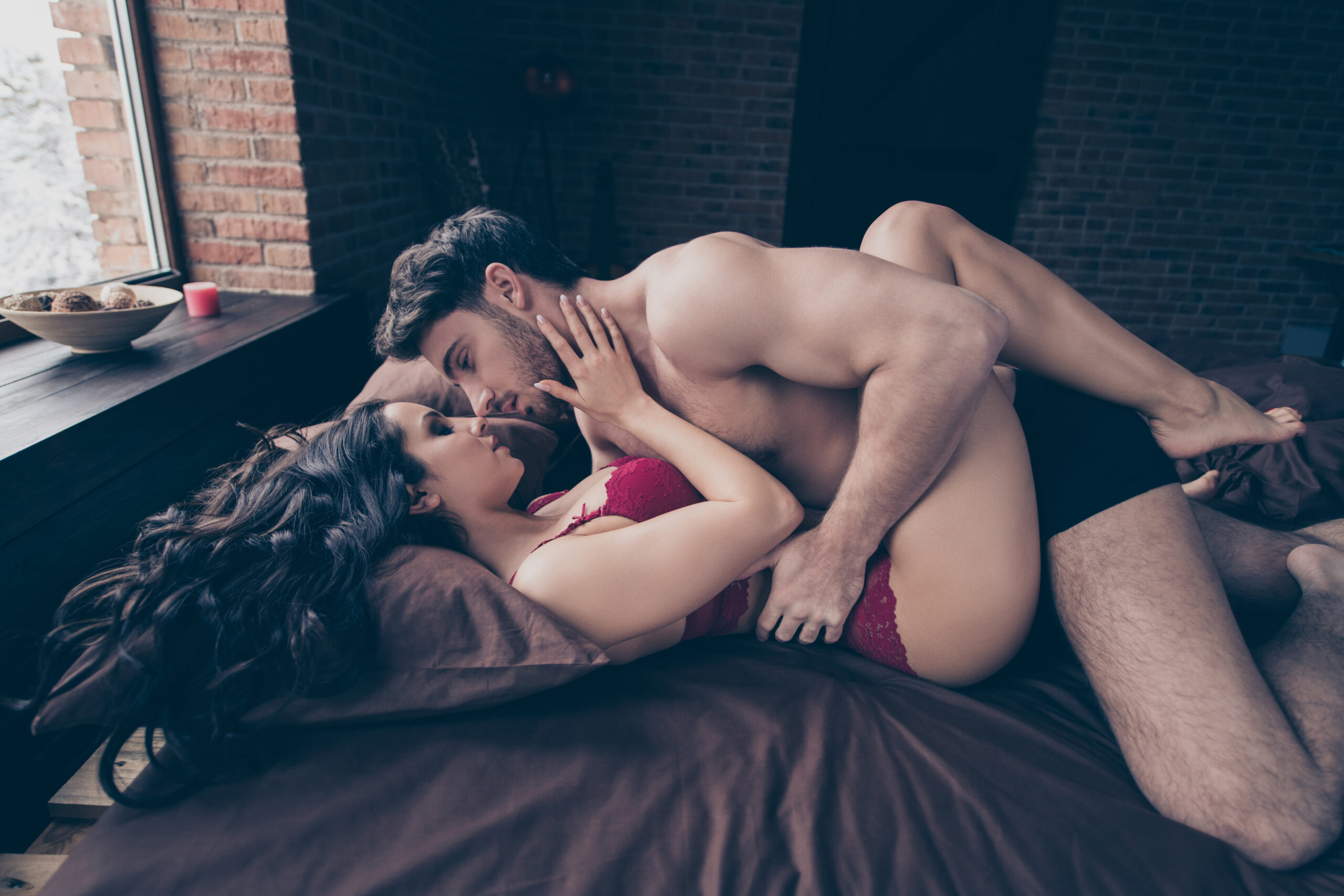 After the incident in the pool, I was very eager to meet the new neighbor in person.  I waited a couple of days before I went over to introduce myself.  I baked some cookies, put on a cute little sundress, and made my way over to his house.  So I could hear music moving around inside as I rang the doorbell.  After the second time, I wasn’t sure he could hear it.  As I started to turn away, the door opened and there stood one of the sexiest men I had ever seen…well, in person anyway, hehe.  My eyes immediately traveled the length of his body before returning to his deep blue eyes.  He was dressed in nothing but a pair of basketball shorts.  His muscles were defined and glistening with a fine layer of sweat.  How could I not check him out!

“I’m sorry to interrupt your workout, I just wanted to stop by and introduce myself,” I said.

“No bother at all,” he replied, “I was just setting some stuff up.  So…you’re my new neighbor, huh?”  I smiled up at him and said, “Yes, I’m Brooke and I live right next door.  I baked you some cookies, but from the looks of you, I should have brought a veggie tray.  Ha Ha!!”  He let out a cute little laugh, took the cookies, and said, “I could never turn down homemade cookies.  Come on in, Brooke, My name is Trevor, by the way.”

As he turned and walked into the house, I couldn’t help but check out his tight, young ass.  Mmm, and what an ass it was!  I followed him in, looking at the house as I walked through.  “It looks like you’re getting set up pretty quickly,” I said.  “Oh, yeah, I am the kind of guy that has to finish what I start before I can do anything else,” he replied, as he turned to smile at me.  Oh, but that statement could go so many ways.

He walked up to me and put his hands on my arms.  Looking down at me he said, “Speaking of, I thought I saw you in the pool the other day.  Did you get some good relaxing time?”  “I started to blush a little, not really knowing what to say, I diverted my eyes.  I knew he saw me, and I came over to flirt, but I didn’t expect him to be so forthcoming about it all!  He put his finger under my chin and gently moved my face to look at him again.

“Now, don’t be shy.  You sure weren’t the other day,” he said, with that sexy smile growing on his face again.

I was melting in his hands, and he knew it.  “Well, yeah, I guess I was feeling a little naughty.  I saw you too, by the way, standing in your window, it made me even more turned on and I couldn’t help it,” I said to him.  He gave a little chuckle and said, “I know you saw me, that’s why I opened the window.”  “You should know,” I started, “I am married, and I have two children.”  “HAHAHA, do you think that is going to stop me?” he asked.  “Doesn’t seem that way,” I said as his face lowered closer to mine.

His lips brushed mine and my mouth opened for him.  That was it, there was no going back, and our fevered bodies started moving like crazy.  We couldn’t stop touching one another and before I knew it, his shorts were off and my dress was pulled over my head.  He laid me down on the sofa, placing my legs up around his head as he dove into my sweet cunt.  Oh my God!  My husband hasn’t licked me like this in years!  I grabbed his head and started to grind my pussy into his face.  He sucked my clit as he fingered my tight hole.  Yes, tight…My husband and I don’t have sex often, and when we do…well, let’s just say, he’s not a large man, haha!

Trevor pulled me up into a sitting position and placed his cock at my mouth.

I opened up and started to lick and suck his hard member like I was dying of thirst and he was my cool drink of water.  His moaning grew louder and he pulled me off of his cock.  “Damn baby!!  I almost lost it there!  I want to be inside of you when that happens,” he said breathlessly.  He moved me to the edge of the couch and bent me over.  Spreading my ass cheeks apart, he positioned himself at my wet entrance and slid all the way home!

“OH MY GOD!!” I screamed out.  “You are SO much bigger than my husband!”  “Haha, not exactly what I was expecting, but I’m definitely going to show you how a man should take care of a woman. “  He started to thrust into me, over and over.  His shaft stretched my unused pussy as he grabbed a hold of my hips, pulling me back onto him each time he thrust forward.  The walls of my tight love tunnel started to quiver, contracting on his big cock as I started to squirt all over him.  “Wow, a squirter too!  MMmmm, yeah baby, cum all over my fucking dick!” he yelled as he pounded into me harder and harder.

My moaning became so loud as I pushed myself back onto him.

I felt his cock growing harder as he got closer to finishing.  I started to worry about where he was going to cum as I had just met him.  He pulled his dick from my dripping hole turned me around and put it back into my mouth.  I sucked hungrily on him, tasting my juices all over him.  My hand was pumping his shaft as my mouth worked every inch of him.  As my throat muscles contracted around him he started to shoot load after load into my hot mouth.  I squeezed every drop of his seed out of him and licked it all from his dripping tip.  “Mmm,” we both said at the same time.

“That was amazing,” he said.  “Yes baby, it was!  Welcum to the neighborhood! Hehe”  I said as I stood.  He pulled me into him, gave me a big kiss, and said, “I couldn’t ask for a better neighbor to have around.  I think we’ll be seeing a lot of each other.”  “You can count on it,” I replied as I redressed myself and turned to walk out of his house.  We had so many more naughty encounters after this.  When my husband or kids were home, I would sneak out back and give him a little show sometimes J  Want to know what else we got away with?  Give me a call, I’d be happy to tell you all about it!!