Nerd Sex: Sabrina is Just Using Him for that “A”! 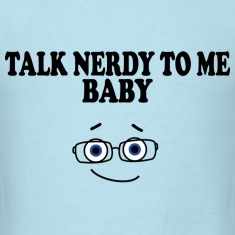 When I was a teenager I was great at a lot of things and I think you all know what those were. The one area that I lacked in was school. I was a good student and smart but I hated doing those long English assignments that took forever to complete. I wasn’t wasting my time with that when I could be out partying or having fun with my boyfriend. Luckily I was hot so I did what any hot brainy girl would do; I got the nerd to be my little homework buddy.

Whenever we had a difficult assignment, I’d get the nerd, Stephen,  to help me but he did most of the work while I played dumb. If he tried to explain things to me I’d distract him by rubbing up against him or putting my hand in his lap and kneading his dick through his jeans.  This usually got him to stop talking.  “Don’t bore me, please.”  I would say very sweetly.  “This is more interesting, isn’t it?”

Towards the end of the school year, we were assigned a minimum 5,000 word essay.   I considered actually doing the work myself but every time I got started with it, I would become bored and frustrated.  I finally decided to hand it off to the nerd.

I called him on the phone and asked him for his help.

He sighed.  “Sabrina.  If you recall, I have the same assignment.  I’m going to be too busy with my own.  You need to just buckle down and work on it yourself.  You can do it.  You’re a smart girl.”

Oh, the nerd has tried this before.  “Well, come over and at least help me select my topic.  I don’t know shit about 17th century poets.”

“You would if you paid more attention in class…” he muttered.

“Nothing.  Nothing.  I’ll be right there.”  he said, hanging up.  I put on a pair of very short shorts and a tank top.  This was going to require more than light touching, I realized.

When he got to my house, looking annoyed, I took his hand and led him to my bedroom.  “My outline is upstairs.”  I explained.  He nodded and followed me upstairs.  I shut the door behind us.  I pointed to my desk and plopped myself down on my bed.

He sat at my desk and picked up my outline.  He turned the paper over and then glanced at me.  “Are you kidding?  You have two sentences on this sheet.  This isn’t an outline!”  he seemed very offended.

My nerd sighed, exasperated now.  “Sabrina.  You know you’re not dumb and neither am I.  I’m not falling for this again.  You make me do all of this extra work for you and you…” he stopped and his jaw dropped.  I had pulled off my tank top and tossed it on the floor.  I wasn’t wearing a bra and I know my tits looked glorious.  I began to play with one of my nipples, twisting it gently, making it hard.

“You were saying?”  I said.  He swallowed and his eyes followed by hand as it trailed down my stomach and to the top of my shorts.  “I wonder how wet my pussy is right now.”  I unbuttoned my shorts and pulled them down a few inches.  I wasn’t wearing any panties and my smooth pussy was now exposed to his gaze.  His face turned beet red and he leaned forward slightly to get a better look.

I slid my finger very slowly inside my pussy and leaned my head back, closing my eyes.  “Mmmmmm.  It’s pretty wet.”  I pulled my finger out and licked it.  “Wet and tasty.”  I smiled at Stephen and stood up, buttoning up my shorts.  “Well, thanks for coming by, Stephen.  I completely understand that you don’t want to help me.  I know you need to get home and start working on your own essay, so…”  I walked over to my bedroom door and opened it.  “See you at school tomorrow.”  I said, cheerily.

The nerd stood up, picked up his back back and practically limped to the door.  I’m sure his balls were aching.  For a minute I thought he was going to call my bluff but just when I thought he was going to dash out the door, he surprised me by shutting it instead.  He put his hands on my tits and gave them a squeeze.  “Your tits are as good as the girls in Playboy.  Better.”  he said.

“You think so?  Thanks!” I said, genuinely happy with the compliment.

“Can I taste your pussy, please?”  the nerd begged.

I shook my head.  “Maybe another time.  I need to get started on my essay.  I don’t want to fail this class.”  I reached for the door handle and he caught my arm.

“I know how guys are.” I said, crossing my arms.  “You’re going to taste my pussy then come up with some excuse to leave and then I’ll get stuck doing the essay myself.  I’m not THAT dumb.”

He went over to my desk, sat down and began to write what turned out to be the most impressive essay.  I ended up getting an A for it and the teacher read some of it out loud to the class.  While Stephen worked on this masterpiece, I painted my toenails, watched a bit of TV, read a little, napped for a while and even went out for a pizza for us.

Stephen was finally finished at 11:00 p.m.   He stood up and stretched.  He looked exhausted.

“I guess you have to go home now and work on your own essay, right?”  I asked.

“Not so fast.” he said.  “You’re forgetting something, aren’t you?”  He glanced down at my crotch and licked his lips.

I pretty much sailed through the rest of the school year with Stephen’s help and I always gave him more and more each time.  By summer break, we were fucking every day and he was an even better fuck than he was a pussy eater.

I learned that nerds are very good friends to have and that they might just have many other hidden talents to take advantage of!  So it’s definitely a win-win.  I’m such a friggin’ genius!