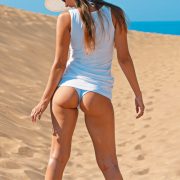 To summarize, my vacation was a multiple orgasm vacation.

One of our goals was to give as many orgasms as possible to strangers; hence, the multiple orgasm vacation designation.

So my friends and I would have a vacation day like this: Lots of hiking, talking, play-fighting. Then we’d come back to the hostel and shower up before we hit the bar. Sometimes, one of us would be too tired to go out, and that was fine. Hiking up mountains takes a lot of work out of you!! Mostly, we’d rest while we showered and then spend the night being wild!!

So, the bars we had were the typical sit-down joints. They weren’t clubs, with dancing and sweaty grinding. They were tourist joints, along the ocean, with lots of people and sitting down after a day of sight-seeing and fishing. Long days and alcohol, plus tourist destinations, meant lots of conversation between strangers.

So, each night we grabbed a pitcher of beer, and the bartender loved us. She knew what we were up to after the second night. But more importantly, she loved the tips single guys would give her for her recommendations. Nothing like being told which sexy ladies were approachable to get lots and lots of cash.

In spite of having the bartender letting guys know we were free and available, some nights we all had to split up. So rather than be a gaggle of girls, we split up. Certainly, one or two girls together would be less fear-inducing to approach than six or seven.

Thus, in this fisher-tourism town, we all focused on getting some of the new fish. Once, two of us went off with a couple of guys into their RV– five orgasms total, as the girls worked on both guys at the same time. Or one of us found ourselves stuck in the back of a car, giving head to one of the locals. I found myself at a fun family outing, once. He hauled me into the hotel room and pushed me into the bathroom. While his wife was asleep, my fish came all over my tits and into my mouth.

Another guy decided he’d jack off right over my ass, pushing me facefirst into the sand at the beach. Fine particles rubbed against my face while his hand rubbed his dick, and soon I got both the ocean spray and his.

I loved my vacation. I mean, it was road trip sex, but with friends. There is nothing better than vacation sex, in my opinion. A multiple orgasm vacation with friends is high up there in memories, at least for me.

I played with a lot of guys. Really, I can’t be expected to remember them all, and I didn’t even win!! But with each guy, I took my time. And one had a special place in my heart, K. K ended up having the time of his life. He was in a hotel by himself. He explained to me that his wife was out fucking other guys, probably bigger guys. In particular, she fucked a bunch of black guys while they went on vacation, and she made him eat her out after.

Well, K was tired of that. He wanted to come, just like she did. And he heard about us from his buddies. Looking me in the eye, he demanded at least 3 orgasms.

I wasn’t about to lay back. I pushed him onto the bed, taking his tiny dick in my hand. “This isn’t even worth it,” I snapped at him, and flipped him over on the bed. “You wanna come so bad? Do what I say.”

Instantly, K opened up his legs and pulled down his undies, letting me reach inside him.

Of all the guys, K was the only one willing to let me slip inside his ass and milk his prostate. Of course, there was no point in using his dick, and it helped I wasn’t looking to get off (I never would have gone with K if I wanted to come). Making a guy like K come over himself again and again while I played with his ass?

The best vacation I ever could have hoped for!!

There’s only one kind of guy who can make me come!! Those are my PSK guys!! Call me and let me have my own multiple orgasm vacation through phone sex!!!