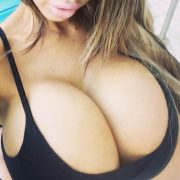 Milking Machines are hooked up to my massive udders!

Milking machines are often used by many farmers to harvest milk from their cows.  How does a cow give off a constant supply of milk to the milking machines?  They are kept in a perpetual state of pregnancy.  What does this have to do with me?  Well, I got to experience this first hand when I went out to Fresh Farm’s headquarters to find out what made their milk so good.  They’d popped up overnight in grocery stories, and the country went ballistic over their sweet, nutritious, one-hundred percent organic milk.  Entire truckloads of cow’s milk were going bad because the nation couldn’t get enough of this one brand.

Where did it come from?  They didn’t care.  How did they make it taste so good?  Who the fuck knew.  However, anyone who did manage to find out the answer to either of those questions would practically become a celebrity.  If, say, a certain reporter managed to sneak into one of their facilities and discover the truth, their career would have nowhere to go but up.

That’s where I come in

It’s my job to find out the dirt on things; especially on big companies.  The job would be dangerous, though, as there were rumors of people attempting this very thing.  Many of them went missing.  But there was one thing those reporters didn’t have that I did; an inside man.  He’d help me get into the building so that I could get the scoop on everything first hand.  It was an opportunity of a lifetime.  I arrived at the place where the magic happens, and it was crawling with perimeter guards.  I managed, however, to find the hole dug for me under their fence behind a bush.  After a quick run across a clearing, I was at the building.  I entered the code to unlock the side door, the light turned green, and I was in.  Despite it being after hours, I could hear the machinery going.

But I also heard the moans of cows in the distance, too.  At least, I thought they were from cows.  The closer I got, the more the truth came to light.  Bound and harnessed, actual WOMEN where completely nude and rigged with breast pumps.  Some were so busty, they gave my double F tits a run for their money, and they were giving up sooooo much milk!  I won’t lie.  I had come face to face with the source of the most delicious thing I’d ever had.  Honestly, I did have the urge to snatch off one of the suction pumps and drink until my heart was content…and rub my pussy while I did it for some reason.

However, I was there to do a job.

I pulled out my camera and began to record their swinging tits being squeezed of every last mouth-watering drop.  Many captives had swollen bellies, too.  Of course.  It wasn’t the only way, but it was the oldest way in the book to get a woman to lactate.  I reached over to free the tits of one woman who was moaning particularly loud.  I thought she was in pain.

That’s when the lights cut on, and I was surrounded by guards.  After being restrained and having my camera taken away from me, I looked towards the upper level only to see none other than my man on the inside grinning at me.  He was no low-level employee here.  He ran the show!

“We’re always looking for new cattle.  You might be a nosy little cunt but, damn, there isn’t a man in here who wouldn’t love to knock that sexy body up and make you the newest member of the Fresh Family.”

It was like the plot to some x-rated Saturday morning cartoon.  What’s worse was that the bad guy was about to win!  I had no way to escape from the grips of those who surrounded me.  They immediately stripped me and hooked me up to one of the milking machines like the rest of the girls.  He wasn’t kidding about the men wanting to fuck me, either.  There wasn’t a loose pair of pants in the house.

“Who wants to do the honors?”

All of their hands went up.

I gulped.  I was about to be impregnated by one of a dozen men.  So…how was your weekend?  Call my phone sex line and let me know. Love impregnation phone sex? Read my blog all about it!