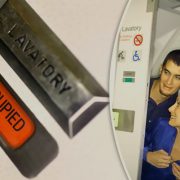 The Mile High Club Was Not For Me. Or Was It?

Travelling frequently for work, most of the time it’s pretty boring. It certainly isn’t the glamorous lifestyle some people seem to think it is. Just tiring and tedious. Well, until I joined the Mile High Club!

Hearing about people fucking on planes and always thinking it must be pretty overrated, it was the last thing on my mind that day.  After all, you’re squashed into a minuscule spot – a toilet of all places! How lovely! Not!

Sexy Stranger With A Tight Arse Makes Checking In A Little Less Tedious!

As I boarded my Tokyo bound flight at Heathrow, looking at me was the most handsome man. He was smiling a rather sneaky but sexy smile as he looked me up and down. Probably mid-thirties and casually wearing jeans and a t-shirt. He had an air of good taste, obvious by his expensive luggage and although I hate to admit it, his beautiful wife.

My eyes were getting drawn to his really quite wonderful arse – those jeans certainly doing it justice. I so wanted to grab it but don’t think the snooty woman with him would be too happy! Oh well, yet another boring flight lies ahead, I was thinking. However, my mind is soon drifting off to visions of he and I joining the Mile High Club.

Unable to settle, I decided to go to the bar and it wasn’t long before Mr 3A joined me. My second G&T – always less tolerable at dizzy heights – loosening me up a little and we were flirting outrageously. His wife was asleep as she hated flying apparently, and so always took some pills to help her sleep. Leaving Mr 3A to hunt his prey, however, as charming as he was, the last thing on my mind was sex with a stranger on an aeroplane!

I excused myself a little while later and nipped to the loo. Looking in the mirror, I was rather flushed and while splashing a little water on my face, the door started to open. Holding my breath I was secretly hoping it was Mr 3A turning up to help me gain admission to the Mile High Club. He didn’t disappoint…

Frantic Fucking With Mr 3A

Within seconds, securing the door behind him, we were locked in the most passionate embrace I have ever experienced. Hands and mouths everywhere and he was soon exposing my big bouncy breasts with his nifty handiwork. As I looked in the mirror at him sucking my nipples, I was shocked at my behaviour. But I knew I wanted him. Actually, not just wanted but needed.

Undoing his belt and jeans there was an immense sense of urgency. We were ravenous for each other as he pulled my tight pencil skirt up and pushed my silk knickers aside. By the time his fingers were making contact with my eager pussy, I was already soaking wet.

He was behind me and through the mirror, we were looking each other deep in the eyes as he slid his hard cock into my pussy and I let out a soft moan. Such an intense pleasure, we were lost in the moment and had hard rampant sex right there standing in the bathroom.

Checking nobody was watching, he sneaks out as I follow, taking my seat a couple of rows behind. Not quite believing what was happening, I settle into a deep sleep for the rest of the flight. No doubt having one of my devilishly dirty dreams of my Mile High Club experience!

Strangely, I feel no guilt as his snooty wife passes me as we de-plane. And with a wink, Mr 3A slides a business card into my hand as he walks by.

I have lots more very naughty stories of sex with strangers so why not call me for the best phone sex you’ll ever need!