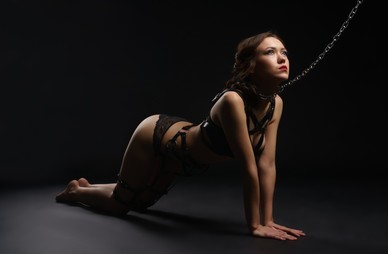 Sometimes, I win.  Sometimes, I don’t.  This was one of those times when I didn’t win. It was a willful loss, though. But that didn’t matter. The only thing that mattered was that I would be my masters new slave for a day. That would be my punishment for losing to him in a poker game.

For a punishment like that, I would lose a hundred times over.  When I caught a sultry gleam in his eyes, I knew that he was just as excited about my loss as I was. He made me undress in front of him. One by one, I peeled off all of my clothes until I was down to my lingerie.  God, how much I already was craving being masters new slave.

He made me keep my lingerie on. I was wearing a lacy red bra which seemed to have a hard time restraining my huge breasts. The only other piece of clothing on my body was a matching pantie hugging my pussy so tightly, he could see the juicy details of my cameltoe.

He retrieved a leash from his drawer and fastened it around my neck. He seemed fully prepared to dominate me, as though he had known that I would wilfully lose the game. Then again, who wouldn’t expect me to lose so shamelessly?

Everyone knew I never missed a chance to be a sexy little hoe.  Like a loyal dog, I crawled to my master’s feet and ran my tongue all over them, one at a time. I was no stranger to the man’s foot fetish. If there was a way to speed up my master’s arousal, then this was it.

Is Masters New Slave Being A Good Little Bitch?

He was breathing hard now, his toes curling so hard they made the veins on his feet even more prominent. He yanked my leash and wordlessly ordered me to straighten my spine. Once I did, I found his hard cock aiming at me like a pistol.

A loyal dog should wait for her master’s command before acting.  And, well, the hardness of his cock was just the command I needed.

I wrapped my fingers around the lower half of his cock and started to stroke him. I could feel him hardening in my grip, his flesh stretching thin as he fully engorged. Being masters new slave, I am ready to take that swelling cock as he sees fit. With a backward tilt of my head, I looked up into his eyes, but I had barely even caught a glimpse of the emotion in his eyes when he shoved me forward so I fell on his crotch.

Fuck Me Until I Scream, Master!

My throat throbbed with a cry. I know I had to let it out. My master would be spurred to fuck me harder if I caressed his ears with such sultry cries.  Exactly what I wanted.

So, I let out every sound bubbling in my throat. And, just as I’d thought, that was the push he needed to go harder on masters new slave.

You want to be my master and have some fetish phone sex?? Call me!