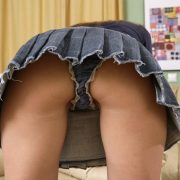 At first, it hurt until I found this amazing invention – lube. That hairbrush, as silly as it sounds, changed my view on everything. Quickly after that, I went soaring to my boyfriend at the time, John, and begged him to fuck my ass. He had a 6-inch dick, which was way bigger than the brush, but that old thing never fully satisfied me anyway. I guess even at a young age I wanted more, and maybe that is one of the things that turned me into the dirty girl I am today.

John didn’t even have the words out of his mouth before my pants were down and I was bent over in submission ready for him. I felt his wet-lubed dick gently press my asshole; I literally didn’t notice he had lube on, I guess that is just how preoccupied my mental state was. He pushed it in slowly and I’m not going to lie, it hurt at first. The breeze from the cracked window brushed against my face as I felt him fill every empty space inside me, chills running up my spine.