Masochist Sub Tries All Kinds of Toys and Punishments 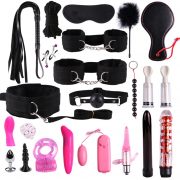 A masochist sub will always know exactly what they like, but sometimes it takes a little guessing game to figure it out. This is a story about someone very naughty that I got to play with recently. I thought some of you more masochistic; submissive men might be into! After all, I sure as hell love to torture a good masochist sub. As long as you have toys, I’m going to use them against you. The date started pretty regular and vanilla, as always. We were enjoying ourselves and flirting with each other. It was all casual and easy-going, and we were enjoying our playdate.

I used it as a way to ask and find out more about his fetishes and kinks. I love to know what drives a man wild, makes him tick & drive over the edge. Soon I realized that he was all about pain. He wanted me. He wanted my mean streak, my dominant side that refuses to take any shit and laughs in your face while you writhe in pain. It was perfect. I remember instantly thinking, “sounds like my kind of man.”

Trust me; I can be a sadistic little bitch. I turned him from a regular man to nothing more than a writhing, tortured cock. Within the hour, he was begging for more, and after another one, he had climaxed another two times and desperately needed some time to rest. God, when my mean side gets going, it’s hard to stop it! He had all kinds of toys to play with, and I used them all. It was like a little toybox, and he wanted to use everything available. Some things were more tam. Some of it was just lingerie, which he had when he wanted to try a little forced feminization instead.

He had nipple clamps, clothespins, handcuffs, whips, and a little tiger balm for good measure. I wouldn’t suggest the last one for any masochist sub novice, though! I usually save the tiger balm for my more extreme playthings. Fetish phone sex can be quite an adventure with me, so I try to take it slow as I figure someone out. It’s not for those with weak stomachs or cocks.  I did every possible thing I could think of. To start, I wanted clamps on his balls, on the sides and right in the middle, between his balls.

I made him beg.

The poor masochist sub knew precisely what he signed up for, but he didn’t think I could be so mean. After all that, he still wanted more. He yearned for every extra whipping and clothespin. I made him beg me to allow him to put on another one. Of course, I couldn’t let him put it just anywhere. I ordered him to put it on the flesh at the base of his cock before he got hard. It pinched and ached, and he loved it so much, he was begging for more CBT all night. I bet that thought alone gives most guys a little chill up their spine!

Next up, we moved on to use the nipple clamps. A good masochist sub is not prepared without nipple clamps fastened on. Luckily for him, he’d had them on since the beginning. He knew how to please me. I rewarded him by twisting them a few times for good measure. And then, we got to play with the handcuffs he’d laid out for me! What a kind, loyal sub. He’d been begging for more pain and more punishment this entire time. Now, he even wanted me to tie him up.

I had him put those handcuffs around his balls, nice and tight. I ordered him to squeeze them a little extra at that point, making them too tight. The show continued, and I made him whip himself every time that I counted. I kept going and counting up further than he wanted, of course. There was just one toy left to use. The tiger balm. That added an entirely new level of intensity for him.

It’s pretty controversial, but I’ve been on many fetish forums where people love to play and torture themselves with it. I’ve had some experience with it myself. So, of course, I had him give it a try. And I’ve never heard a sub whimper so much. It was making his balls and cock ache, but he loved the feeling. I guess we’ll have to use it more next time.