Forced Feminization: Dressing Up My Sissy In Lingerie 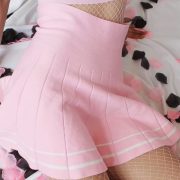 A forced feminization punishment is exactly what my little sissy asked for. See, I have this boy toy that we’ll call Jamie. Now, Jamie used to be a pretty macho man, the typical Type-A personality kind of guy that used to play football in high school and college. Jamie used to be one of my favorite fuckbuddies to play with from time to time, even though sometimes his dick just wasn’t big enough to fuck. His cock’s rather small, actually. All I ever did with him was tease him and use him up for all the attention he could give me. He gives plenty of attention, though sometimes I couldn’t help but wonder if he was actually checking me out, or more interested in what I was wearing.

I got my answer quickly after that question came to mind. I had him over one night, and he was fawning over me and the cute little mini-skirt I was wearing. He left the room for a few minutes to go answer the door for the pizza delivery guy. Unfortunately for him, he left his phone unlocked right on the desk! I got to it as quickly as I could, because I was loaded with questions. After all this time, I wanted to know what really made him tick. Sure, I turned him on by wearing cute little outfits, but he never really wanted to fuck. Honestly, I was happy about that because I enjoyed just making him jerk off to me instead.

I wasn’t prepared for what I found.

I immediately started to wonder if that’s why he was always so content to just jerk off to me. He had all kinds of Google searches giving away his kinks. He’d even looked up taboo phone sex in the past, without any clue in the world that I do that myself. This little kinkster fell right into my lap, and he was as naive as could be. The poor guy was totally innocent to what I was going to do with him once he stepped inside that room. He thought he was just bringing the pizza to me so that he could treat me like a queen. But now, I had other plans.

Now, he was going to be my bitch.

And trust me, the look on his face changed everything. He walked into the room to see that I’d picked out a little outfit from my closet. I set the frilly little pink outfit on the bed, pretending to look it over as if I was deciding on what to wear later. I could see him vicariously living it as he stood across the room. HE wanted to be the sexy young girl in a tiny skirt and tank top. HE wanted to wear the pretty, black, stiletto heels and make every man look after him. Honestly, he was as gay as gay can be, and his porn history had given it all away. Can you imagine his face when I picked up the cute little tank top and walked over to him?

He fell silent, and must have thought that I was going to ask him to help me put it on. However, he blushed bright pink when I told him HE was going to wear it for me. I’d never seen a man turn so shy in an instant. His cheeks blushed bright pink and he started sweating, and stammering as he talked. He thoroughly couldn’t believe that he was now the victim of a little forced feminization play. He’d only been fantasizing about it for years. I’d turned a man into a stuttering little girl in the matter of a minute. I walked away to pick up the skirt, looking at him so that he could tell I was dead serious. After staring him down, he hardly hesitated another moment. He ripped everything off, getting completely naked in front of me.

And then, the fun started.

The man-clothes were off, and the frilly pink clothes were on. He put them on like a good little sissy, falling in love with the forced feminization I was putting him through. I wasn’t just going to dress him up though, I was going to break out some bigger toys and give him the fucking he’d been craving, as well.