Love/Hate Relationship: HOT sex – With Someone You HATE!*

Love/Hate Relationship: HOT sex – With Someone You HATE!

Everyone’s had that love/hate relationship in their life: someone that you LOVE to hate – AND to fuck! But can’t actually stand otherwise. I called mine up on my birthday because I wanted to have some REALLY hot sex. I hate him SO much, I hate to admit that he gives me some of the hottest sex I’ve ever had! He’s SO fucking annoying, but my cousin’s husband has a cock to die for, and knows just how to use it on me!

The feelings are mutual on his end. He can’t stand me either – it’s always been that way! We’ve known each other for ages, before he and my cousin even met. But that’s when we got to know each other… a little better. 😉 My cousin and I were 18 years old when they got together, and he was 20. My cousin was my constant companion during the summers – until HE came along! We even shared an apartment this particular summer, which was AWESOME! Until THEY got together. Then I had to put up with him in my face all the time instead of just most of it! God, he was such a moron! (OK, OK. Admittedly, he was pretty hot. But he KNEW it, and I hate that “I’m the man, bow and worship me!” attitude that hot guys have!)

The first time anything happened between us was when my cousin went home to visit her mom and dad for a few days.

He KNEW she wasn’t around, but he had a key to our apartment, so one minute I was sitting at home alone in my panties and t-shirt, enjoying the peace and quiet, and the next minute, he had let himself into the apartment and was standing there leering at me from the doorway! “What the FUCK Kenny!” I yelled at him, snatching a blanket and covering myself up. “You know Kylie’s not here! Get out!” He just laughed and threw himself down on the couch next to me! The NERVE of this guy!!!

He looked at me, and it suddenly felt like the blanket covering me was invisible. What a creep! He said in his self-assured hot guy voice, “I don’t wanna hang out at home with my parents, so I decided to come crash on your couch for the night”. … what? What was he thinking? I said out loud “oh HELL no! You’re not staying here with ME! This is supposed to be my break away from having to put up with you!”

He scooted closer to me, and oddly, instead of making my skin crawl, I felt my panties getting wet! WTF? I hate this guy! This was the moment I realized we had a mutual love/hate relationship! He leaned in, putting his nose almost up against mine and whispered “Yeah, I know what you mean. I can’t stand YOU, either. You drive me insane. You are such a Princess, and I can tell you think I’m not good enough for you. You’ve ALWAYS thought you were too hot for me.” I sniffed scornfully and was about to make a smart reply when he suddenly pushed me down on the couch and pressed his body down on top of me! I freaked OUT; but it was because as my body squirmed beneath him trying to get away.

I felt my nipples getting hard and my pussy getting wetter!

Swatted at him, yelling for him to get off of me as he laughed, then suddenly he grabbed my arms, pinned them to the bed, and his mouth was pressing down on mine – HARD. No one was laughing then. I could feel the intensity of the attraction between us. His body was so muscular! I hated him, but my body loved his! I could feel his hands, groping all over my big, perfect, natural tits, and he moaned softly into my ear, one word: “finally”. Could feel his hard cock pressing down against me, and it was HUGE! I wanted it! Without a word, I was aggressively ripping at his button and zipper to get at the cock that I now just HAD to have! I felt his whole body stiffen and heard him moan deeply as my slim fingers closed around it.

… Call me to hear the rest of the story. OR to tell me about YOUR love/hate relationship with someone you just HATE loving to FUCK! 😉 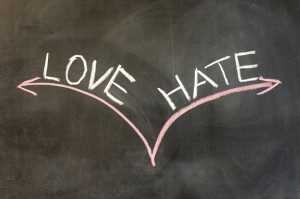