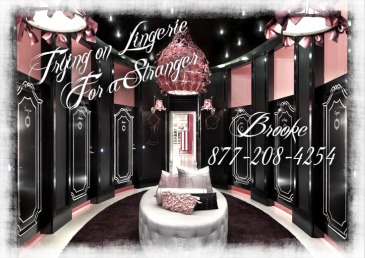 The lingerie fit nice but he wanted more.

I was trying on lingerie for a stranger. The first part of this story will give you details of how it started. The man asked me if he could feel how the fishnet lingerie felt on his own skin since he would be using it with his wife. I was a little hesitant at first but it did kind of make sense and besides, I was kind of turned on trying on lingerie for this stranger. My long-term boyfriend wasn’t even around to know that the stranger had entered the fitting room with me. We sent him off to get a smaller size for me to try on.

I had taken off my bra and panties to get the full effect of the lingerie for him. The crotchless fishnets were surprisingly soft on my skin but when his hands moved up and down my sides I felt my pussy start to flood with warmth. I didn’t even have anything to hide it but it’s not like he was feeling there so I thought I was safe.

That was until he asked me to sit on his lap so he could feel it better.

I did as he asked not seeing any harm in it but damn, I could feel the evidence of his approval as well when my ass pressed against his hard cock. I let out a little gasp when I felt the length of his dick pressed against my nearly exposed ass. He apologized but when I stood back up I left some of my own evidence on his pants as well.

It’s not like the lingerie held my wetness in. The small spot on his pants was pretty obvious and I was a little embarrassed. He told me not to worry about it but asked if we could continue with him in his boxers so we don’t have anything else happen to his pants while we’re trying the lingerie out. I hesitated a little but he promised to be good.

He slid his pants down and pulled me back down onto his lap.

His cock was still hard but with my bare pussy on his boxers I could feel the head of his cock starting to fall out. That was all it took. His hands were already feeling around on my sides, stomach and then when they moved up to my breasts I started to press myself down onto him. I felt his dick jump a little as my ass pressed tighter against him.

We were a little lost in the experience when we heard a knock on the door. My boyfriend had come back with the smaller lingerie. I tried to sound as normal as possible when I told him to just lay it over the top of the door and thanked him. He asked where the guy went and I quickly told him that he said something about going to look around for some other stuff while I changed. He believed me and said he’d be outside the door if I needed anything.

I thanked him and let out a sigh of relief as I heard him step away.

The fact that my boyfriend was right outside the door did nothing to stop the sexual tension in the small closet-sized room. The stranger’s hands squeezed my pert tits even tighter as I slid my hand down the front of my body to his hard cock beneath me. Freeing his cock I used my hand on the underside of his cock and started rubbing the shaft against my dripping pussy.

We had gone this far, but he was a stranger and my boyfriend was right outside the door.

Should we take it further? Fuck I wanted to so bad!! But what if we got caught?! Do you think I should take the next step and fuck this hot stranger in a public fitting room with my boyfriend outside the door? Give me a call and let me know what you think!!