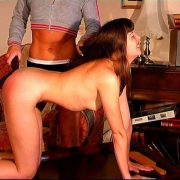 With a little trust built, I experienced the pleasure of introducing my sub to some light paddle play!

At first, light paddle play kind of frightened her a bit. She seemed disinterested in the idea, so I strayed from it. Never the less, I own several impact tools and revel at the opportunity to use them on others. She knew that I had a few fun little tools tucked away that I could beat her with. A while ago, I took the paddle out just to scare her. I dragged it across her skin and teased her with it, sliding it between her legs and pressing it to her hot skin. Then, I proceeded to not use it on her and instead do something else. This time, I chose to have my little fun with her and the paddle, after I noticed her expressing increased curiosity for impact tools.

We discussed that she did, in fact, want to get beaten with a tool. After seeing the lovely tool that I wanted to use, I made a little take over bag to use on her. This bag included my sexy, thick, faux leather paddle. This bag also included a strap-on and, of course, my handy dandy wand. I brought these over to her house and laid them out on her bed. I stripped her down to her panties. We decided to start with the paddle. It was long, thick, and heavy. But not as heavy as a wooden paddle. I ordered her on her hands and knees, with her legs spread apart. Her forehead pressed to the bed. Slowly, I gently began bonding her to the instrument. Dragging it down her spine, between her legs, and over her thighs.

I moved it over her ribcage and pressed it to her nipples.

Then, I moved it below each nipple and pressed it into them with the edge. Beginning at her ass, I lightly tapped, punctuating with harder snaps of my wrist. I tapped around her ass and then moved to the backs of her thighs. Every now and then, I took a little break to grab her between the legs and play with her. Then I hit in between her thighs and on the outside of her thighs. I moved up to her shoulders and biceps, tapping and then striking. Then, I told her to flip over. I told her to interlace her hands and place them behind her head. I made her spread her legs and stuck her all along the insides of her thighs. She seemed to really take to our light paddle play.

Then I moved over the tops of her thighs. After placing her legs, one by one, on my shoulder, and again I struck the sensitive underside of her thighs. Then I moved to the tender underside of her arms. I took the paddle and placed it between her legs, dragging it back and forth over her. Lastly, I moved to her nipples. I lightly tapped over her nipples in swift little pats. She had such perky small tits that were just perfect for striking. She began to squirm around until finally, she requested that I fuck her. I harnessed up my pretty purple, vibrating, strap-on, and positioned her in good old missionary. After sliding off her panties, caking her in lube, and then drowning the strap on in lube too, I eased into her. Nice and slow, pressing in as far as I could.

The strap-on was positioned so that it pressed firmly up against my clit as I pressed into her.

And that part, as well as the part inside of her, had a vibration option. After fucking her for a bit, she requested I use the vibration. I picked up the little remote and turned it on. I fucked her until I came from the strap-on squashing my clit. Then, I pulled out and grabbed the wand to finish her off. I teased her with it for a bit. Pressing it down and then letting off. Eventually, I decided to make her cum. I pressed it down and held it between her legs while she wiggled and squirmed and finally came. She said she was definitely a fan of light paddle play.

For fetish phone sex give me a call! Read more of my blog for the quiet game.