Lesbians Fuck With Each Other in the Most Embarrassing Ways ♕ 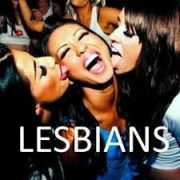 Lesbians fuck with each other

Lesbians fuck around all the time.  I don’t literally mean lesbians fuck around, though.  I mean, they do that, too.  Think of all of the shit two girls can get away with simply by being girls.  You can have a lot of fun in a dressing room or a bathroom.  In this case, I’m talking about hijinks.  Lesbians love to get their straight friends going.  I have to admit; I’m a sucker for it.  Putting panties all over my apartment that clearly aren’t my size so that when the company stumbles upon them, I have to explain how I’m not some pussy hound (although I do dabble).  Or maybe they hide one of my missing vibrators among the wine glasses.  That…happened.

Jamie made it no secret that she liked pussy.  Imagine a sporty bombshell with an amazing ass.  On top of that, if It’s female, she wants to fuck it.  In her mind, everyone is at least a little gay.  So, she has no qualms about flaunting that hot, tight body in front of us girls.  She’ll be the one in our group showing up at the beach in a literal string bikini.  Even if you’re a girl, how could you not stare at that?

She called them pranks, but it was like she wanted guys to think I was gay.  I dismissed it all at first, but then something happened at a party that I won’t soon forget.  It’s got to be the cruelest thing she’s done.   So, I got a bit drunk.  I wouldn’t call myself sloppy drunk, but it was getting pretty hard to hold myself together.  It was weird, though.  I don’t remember drinking that much.  Luckily, or unluckily, Jamie was there to walk me back to our hotel room to get some air.  Since she was helping me keep my footing, I didn’t mind her hands going absolutely everywhere.  And they most certainly did go everywhere.  Still, all I wanted to do was lay down.

What’s that warm feeling on my pussy?

I felt a hot slickness trail across my pussy, and I’d gotten enough oral sex to know exactly what was happening.  But this time was different.  This time was really, really good!  The whole mouth was around my cunt and sucking at my clit as it needed it for nourishment. Like any other red-blooded human would do when they were getting head.  I got into it.  I had a cum-now-ask-questions-later mentality.  Someone was snacking on my pussy, and I was happy to let them wash it all down with my squirt.  I planned on really messing up someone‘s face and didn’t hold back when the time came.  So much pussy juice went everywhere.

That wasn’t the end of it.

They maxed out the settings.  Ever seen a girl squirt on the dancefloor?    Hopefully not.  Hopefully, no one saw.  I was out of there so fast, and it wasn’t until Jamie, and I got into our Uber that she admitted to being the one responsible.
So yea, lesbians fuck around with people.  Now I’m formulating a revenge fuck.  How should I get back at my lesbian friend?  Call my phone sex line and let me know.