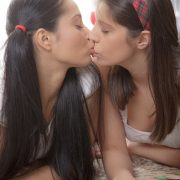 A Lesbian Story  That Took Me By Surprise

I had quite a surprise recently. I knew I would be getting a new boss since the old one was moving away. Imagine my surprise when I knew who it was. I walked a girl I’d gone to school with and been best friends with years ago. My jaw dropped when she walked in the door. She looked surprised to see me as well. We went back to my place after work to talk about old times and reminisce. We picked right up where we left off. The thing is, when we were in school, we fooled around together a lot. This was before either of us ever had a boyfriend.

We Got To Know Each Other Sexual Secrets

I Was Excited About The Possibilities

She Knew Just How To Touch Me

She asked me if I’d ever played around with other girls other than her. I said no. She reached over and kissed me. It was all so familiar and sexy. She was soon fondling my breast, making my nipple hard. I then felt her hand go under my skirt and begin to toy with my pussy lips over my panties. I spread further for her and my wetness opened for her. She still knew just how to touch me. I reached over and touched her as well. It was just like old times. In moments our clothes were on the floor and we were rolling around on the bed.

I Went For Her Hot Pussy

We had both developed a lot more since the times we used to play. It was fun to explore one another’s bodies in a slightly different state than we had years ago. One thing we never did when we were young was to go down on one another. That was going to change tonight. I was knuckles deep in her pussy and her in mine. I wanted to know what that pussy tasted like after all these years and I just went for it.

And I buried my face between her silky thighs and I lapped at her shaved wetness, seeking out her clit. I took it lightly in my teeth and wiggled it back and forth. She moaned with pleasure and I licked at her pink folds until she was gripping the sheets in ecstasy. Her legs shook as her orgasm began to rise within her. I quickened my pace and she soon came all over my face.

She Gave Head Better Than Any Man I Ever Had

She wasted no time returning the favor.  And she got down between my legs and placed them over her shoulders and really got in there. She began to thrust two fingers into me in a twisting motion while she concentrated on my clit. I had a feeling she’d done this before. She seemed pretty practiced at it. I was not complaining. She latched onto my clit and sucked and sucked and sucked some more. I thought I would pass out from the pleasure. She gave head better than any man I’d ever had down there. My mind was swirling with pleasure as she brought me to orgasm after orgasm. The entire weekend was like a dream lesbian story filled with many naughty pleasures. I was so glad we reconnected, albeit unexpectedly.

I love to have really hot phonesex. Join me for the very best!