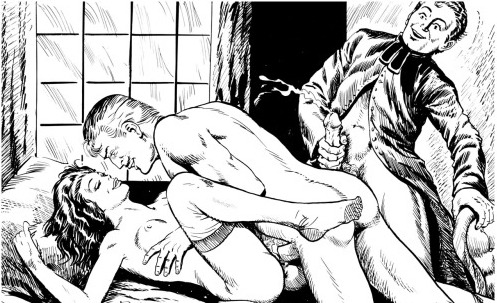 I met this guy at a bar last night, I don’t remember his name so let’s call him Marty because he bought me a martini. Well, he bought me a ton of drinks, one was probably a martini. He was hitting on me all night which got annoying but he bought me those drinks. Tipsy me thought it’d be a good idea to go home with him.

I knew Marty was after a fuck but he didn’t turn me on that much so I was just going to blow him and go home.

He tried to take me to the bedroom but I told him to slow down and pushed him on the couch in the living room. Marty sat there and I leaned forward, wrapping my arms around his neck as I kissed him. He slid his hand up my skirt and grabbed my panties, tugging them down. They fell to my ankles and I kicked them off as I started to have fun.

Forgetting all about not wanting to fuck him I stood up so I could take off my dress.

I only had my bra left but that didn’t stay on for long and all of a sudden I was buck naked in front of him. “Come on,” I whined and started pulling at his clothes, trying to get him naked too. I helped him take his shirt off then watched as he took off his pants and boxers.

His dick was semi-hard and I dropped to my knees. I was going to suck him off just enough to get him rock hard and dying for me then fuck him so I started stroking his dick while sucking on his head. He was moaning loudly and I went lower, sucking on nearly all of him while he held my head down. I was really getting into it when I someone smacked me on the back and said: “Who’s this slut?” I jumped and Marty hit me on the head as my teeth grazed his dick.

Looking over my shoulder I saw a guy standing there with his dick bulging his pants.

Marty grabbed me and shoved me back on his dick and Jerry grabbed my hips, pulling me up. I stood there bent over and tried to suck off Marty while his roommate unzipped his pants and started rubbing his dick over my wet pussy.

He kicked my legs further apart and pushed into me with one thrust. This was turning into  Crazy Sex!

I braced myself on Marty’s thigh and sucked him off as his roommate fucked me. He fucked me hard, going at me with rough, jabbing thrusts while he grunted behind me. My lips were sliding up and down Marty’s dick quickly and he kept bucking his hips up. They were totally using me and I loved it.