Kinky Sex Is Even Kinkier With A Messy Golden Shower!* 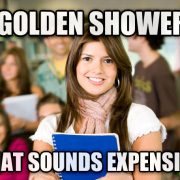 I always love tying up a man, making him completely submissive to me. I walk around the bed and tie both of his wrists together. Then, I brought his tied wrists to the top of the headboard and tied them up there nice and high. He had a blindfold on so he had no idea what I was going to do to him! I was so excited to give him a nice good messy golden shower without him seeing it coming! Next, I tied his calf to his thigh on each leg. I’m willing to bet, this will be his kinkiest sex experience!

I got between his legs and I started rubbing on his hairy cum filled balls. I rubbed, twisted, and squeezed until I saw his cock was standing straight up! Then, I licked my pointer and middle finger and shoved them in his ass. He was taken by surprise and let out a yelp. I began to finger fuck his ass nice and slow while I massaged his balls. After some time, I went faster and faster. He absolutely loved it. I watched as his mouth opened nice and wide to let out a nice loud groan. His cock pulsed and he shot his load all over his stomach.

“I can’t believe you came so fast! As punishment, I should have you drink it all up for me!” I giggled as I pulled the fingers out of his ass.

I stood up and let my piss fall all over his naked body, giving him a nice messy golden shower! Next, I lowered my pussy down to his cock and put him inside of me. I started riding him and grinding on him with my ass facing him. Carefully, I pulled out my 10-inch strap on and slowly started to push it into his ass. He moaned louder and louder the deeper I pushed it inside of him. Then, I pumped it in and out of his ass so fast he could barely handle the pleasure!

I could feel his cock ready to burst inside of me so I climbed off and took the cock out of his ass. “I want you to suck this toy clean for me,” I commanded him.

What he didn’t know, was he wasn’t about to suck on a toy.

My boyfriend had been watching the whole time and he wanted a little naughty fun too! He pulled his pants down guided his cock into the piss boy’s mouth! The dirty boy sucked and sucked on that big meaty cock of his! Then, as he sucked on the toy, I started squeezing his balls again. Tighter and tighter. He started moaning with that cock in his mouth.

Finally, I took his blindfold off and the look in his eyes when he saw that he had another man’s cock in his mouth was unbelievable! He tried to move away but he was all tied up! It was time for another messy golden shower! Then, my boyfriend shot his creamy load right to the back of his throat, following it with a nice long stream of hot pee. He trailed the pee from his mouth and face all the way to his cock. Next, my boyfriend gagged him with my panties and I got between his legs again.

I pushed his legs all the way to his chest and stroked his cock as it’s pointing right at his face. The faster I went, the harder I could feel his cock getting. He wanted to burst so bad! Then, my boyfriend pinched his nipples nice and tight and his cock exploded all over his face!