Kinky Impregnation Fetish: Will Those Alpha Males Make Me A Breeder? 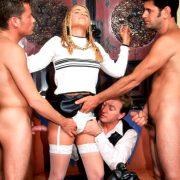 Kinky impregnation fetish ~ You want to see me get bred, don’t you …

Even more, I’ll bet you’re thinking about fucking a baby into me RIGHT now, aren’t you. Shhhh, it’ll be our little secret.

Anyway, where were we? When we ended last time, the movers had just grabbed me. Alpha males all, the three men surrounded me, groping my toned curves. Terror filled me, mixed with other emotions I wasn’t yet ready to identify, much less admit. After all, they couldn’t know about my kinky impregnation fetish, could they?! The guys petted me through my clothes, their rough hands finding my inner thighs, taut tummy, the length of my spine, and around my high, firm breasts.

Panicking a little, I tried to fight off three pairs of questing hands to no avail. Feeling as though I was being touched everywhere at once, their clever hands found all of my sensitive spots so eagerly, so forcefully. I was a doll in their hands and I knew it. Worse, so did they. I tried to cross my legs, but powerful fingers pried my thighs apart anyway.

“Hey, what are you doing to me? Stop it right now!” I yelled.

My protests fell on deaf ears. Indeed, the boys had just found a brand new toy for their kinky impregnation fetish: ME.

Joe spoke behind me, his chest pressing against my back. “I told you, Angel, we don’t settle for just any girl. And it seems like you do want this, I can tell.” Feeling his hand slide up my thigh till it disappeared under my skirt, I jumped as his questing fingers brushed across my hot, moist thong.

The foreman’s chuckle reverberated through my petite frame as he half-growled, “I think you want this more than you’re ready to admit, Angel!”

As he stroked along my aching slit, my knees nearly buckled as I let out an involuntary moan. “N-no! Get away from me!” I began to struggle, trying to break free from the groping men. But they were too strong for me, and it goaded them on.

Lifting my arms up, they quickly pulled off my t-shirt. My skirt slid down my legs and pooled on the floor. I stood between them, only my lacy bra and pink thong to protect me. Their rough hands touched bare skin as I vainly tried to cover up and push them away.

Joe’s voice played in her ear. “It’s been a while since we had a customer as sexy as you, Angel…” Grabbing my bare ass with one hand, Joe groped one of my young breasts with the other as he continued “…or as ready to get fucked. We’re pretty pent up, you know…” With a flick, my bra went slack and fell to the ground. Because he was behind me, Joe cupped my bare tits before I could cover myself.

“Mmm, that feels so good…” I thought, despite my fear.

My alarmed gasp turned into a moan as those rough fingers toyed with my hardening nipples… “NO!” I back-thought, “What am I thinking!? I won’t let them rape me!!” My heart pounded in my chest, but I couldn’t tell if it was from terror or excitement.

“You’re not going to fuck me, Joe!” I yelled, my heart jolting at the thought of Joe and the men taking me against my will. Redoubling my efforts, I struggled to land a kick on the men holding me. Instead, they simply pressed closer, surrounding me with their powerful bodies.

“But of course I’m gonna fuck you, Angel. Matter of fact, we ALL will,” Joe replied as he slid his knowing fingers under my thong strings.

Joe peeled away the damp fabric that clung to my sex, then dropped my panties to the ground as I kicked.  Taking turns, the three men took turns cupped my throbbing pussy mound as I tried to lock my thighs together. Even so, I’m sure they could feel just how wet I was getting. As my heart pounded in mortified excitement, my thighs loosened to allow their pressing touches.

The hands left my body. My eyes snapped open, although I hadn’t noticed closing them. The two movers stood in front of me, looking me over like hungry tigers. Taking the chance to run, I tried to sprint away. However, Joe easily seized my bare waist and hauled me backward as I kicked ineffectually. Grabbing my wrists, he wrapped my arms uselessly in front of me, like a couple at a dance.

Obviously, I couldn’t escape what was about to happen.

“No no no, Angel! You must watch,” Joe taunted in my ear as he held me tightly. Shivers shot down my spine, stopping my futile writhing. As the moving men quickly yet casually stripped, their eyes kept roving over my naked body at the same time. Staring helplessly as they removed their company shirts, I couldn’t help noticing their tanned, muscled chests. After that, they tossed aside their jeans and briefs. I tried not to look at the virile, hard cocks springing up practically before my eyes. Despite that, my mouth instinctively watered.

“They’ve been waiting a long time for a girl to breed…” Joe said.

My heart began to pound insistently, my mind denying what my body couldn’t. “Breed?!” I moaned aloud before thinking “What the fuck does that mean!?”