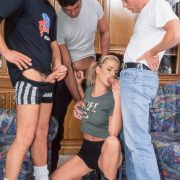 However, I’ve never told you exactly what happened when the movers “came.” Over and over again, as a matter of fact. Oooh, did I say that?! 😈

As far as moves go, at first it was fairly routine. Three moving guys transport a college girl’s belongings into her new place. Simple, right? On the other hand, that’s where the “normal” part ends. First of all, I couldn’t help noticing that these men were totally built and undeniably masculine.

Secondly, each one sported muscled arms, a hard chest, and a trim waist. Most importantly, all wore jeans that bulged with what hinted at very large cocks. In fact, I couldn’t help noticing that the crew leader was completely ripped!

“No problem, though. We can fit your bed in here just fine,” he said as he continued looking around her bedroom. I released a breath that I suddenly realized I’d been holding.

“Fuuuuck, he’s hot. Mmm, just how BIG is that dick of his? Down, Angel, down!” I thought to myself as I tried to stop staring at this dude’s very impressive package.

Glancing around, I saw the other two moving men, looking quite buff and toned. Amazingly, they were almost as hot as the sexy AF foreman. My body tingled as I watched them carry my large sofa sectional in as easily as if it were an empty cardboard box. “Where do you want this?” one of them asked.

“Mmm yeah, the places you men could ‘put’ it…” I mused silently as my mouth watered.

This is a pretty nice place you’ve got,” Joe said, making conversation. “Excited about moving in?”

“Oh yes – yeah, I’m pretty revved,” I answered, wondering if he knew just how “excited” I was at the moment.

“We’re usually having to move refrigerators and 500 boxes for little old ladies that smell like mothballs, so this is a nice change of pace for once.”

I arched a brow, then laughed aloud. “Mothballs? Seriously?”

“Yeah, we could hear ’em rattling around in everything we were moving. Couldn’t get the smell out of my clothes for days,” he smiled.

“Haha, well I don’t think you’ll have to worry about picking up a bad smell here. No mothballs for me!”

“I’ll take your word for it. Seems to smell rather nice in here, actually,” he grinned, flashing me a sidelong glance. Oh, shit. As a result, I blushed even harder.

Omg, could he smell the juices drenching my panties? Did it smell like pussy in here?

This wasn’t the first time I’d thought about hardcore sex with a stranger, but there was something about this man that made me want to fuck him on the spot!

“So, uh, what’s your name?” I asked, suddenly possessed by the need to brush my blonde hair back and study the tiled floor.

Grinning at me, he said, “Name’s Joe, Miss Blackwood.”

“Ah, you can call me Angel, Joe,” I said as I politely extended my hand.

“Well then, Angel, it’s a pleasure to meet you,” Joe replied as he reached forward to take hold of my hand.

I watched my small hand disappear in his firm, electric grasp. We shook, our hands barely moving, yet I felt his strength all through my arm. Stifling a shiver of pleasure, I steadied myself. Realizing my legs were a bit unsteady, it felt like my knees might buckle. Dayum, what was it about this man? Hearing the other two moving men return, I was relieved to have a moment to collect myself.

“Joe,” said one of them with a box under each arm, “in the time you’ve spent talking up the pretty girl, you could’ve emptied out half the truck!”

“Yeah,” the other grunted as he set down a large box, “bet she’s tired of you trying to ogle the goods instead of helping us move ’em!”

Blushing even harder, I groaned inwardly. But Joe just laughed, “Alright, alright, I’ll help you pansies out.” Turning back towards me as he hiked his thumb over his shoulder, he remarked, “See what I get to work with? They still won’t forgive me about those mothballs.” I smiled back, Joe turning around to disappear out the door.

Leaning against the bedroom doorframe with arms crossed under my breasts, I casually settled in to enjoy the show.

As I watched them work, I noticed that the other guys were a little more heavily built than Joe. They were stockier, with legs and arms knotted with muscles. However, Joe’s build was more lengthy and toned. Regardless, I couldn’t keep my eyes off them all. Furthermore, my thoughts drifted to how they would look without their blue work shirts covering their sweat-slicked chests, yum!

Feeling a little breathless, I watched their strong biceps flex as they easily carried my king-sized bed as if it weighed only a pound or two.

Meanwhile, I heard a polite, deep cough at the open bedroom door. Of course, that made me suddenly realize that the movers had stopped talking. Looking at me through the doorway, all three males stood just a few feet away, Joe in front with his arms crossed.

They grinned as I hastily pulled my top back down, face on fire as I realized the undersides of my swelling titties had been exposed.

Stopping, I turned. “Um, do… do you guys only take cash then?”

This time, they all laughed heartily. “Oh no, we’re not going to take any money from you, Angel.” Joe stated as he stepped forward, “Indeed, I’ve discussed it with my boys. With that in mind, we all agreed that we’ll be taking something else tonight…”

Feeling very small before the wall of muscle-bound men, I backed up a little as I hesitantly asked, “W-what will you take then?” As a result, my breath caught in my throat. After all, I’d just realized there was nowhere to go. My body already admitting what my mind wouldn’t, chills ran up my spine.

Without delay, all three men were upon me. First, they grabbed my arms. Next, their strong hands stroked up my tanned thighs. Then, someone squeezed my swollen tits. Exhaling convulsively in a mixture of terror and breathless anticipation, I groaned. “What are you doing? Stop!”