Kicked In The Balls: Some CBT Play For My Bratty Sub 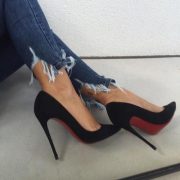 He loves to get kicked in the balls.

Kicked in the balls, over and over again. Can you imagine that? Are you highly submissive? Do you love to get tortured like a little masochist? I have a soft spot for good, masochist subs who love doing what they’re told and get punished for it anyway. However, I have a little bratty sub to deal with now! We’ll call him Alan, though I’m always calling him my little bitch. He’s always fun to play with. He knows I have several fuckbuddies, friends with benefits, and ‘toys’ that I like to mingle and play with. That’s why he cherishes the moments we have together and loves giving up control.

He knows if I’m enjoying the time I have with him, and he acts out, I can get rough. Ridiculously rough, and downright mean sometimes, too. Like when he’s purposely giving me a little lip, a little back-talk. I like to make him pay for it. My mean streak comes out, I can’t help it. He gets a little bit of a show when he acts up because he has a pantyhose fetish. When it’s time to play, I make him strip down and of course, he gets a peek at the lingerie I wear underneath as well. I love to wear his favorite lingerie. It’s a sexy one-piece teddy made of black and pink lace.  The fun part is that all he can ever do is watch.

My rules are very strict for him: hands off.

He can’t touch me unless I allow him to. I work him up just enough that he might act out on purpose so that I’ll take control and punish him. Just last week, he’d been messing with me all day. He acted out and had been a little sassy, rude, and playing little jokes on me. He was a brat. I allowed him to come and play with me, but he was acting out and refusing to come over and pleasure me. Usually, he drops the bratty act if I tell him I want him to eat me out. This time, he sat by and continued.

He made me have to come and get him instead. So, as a little punishment for not wanting to eat me out for our daily playtime, I gave him something to remember me by. I know he loves to cum, so my first thought was to make him edge for a while. However, that punishment wouldn’t be enough for him. I needed to kick him in the balls for being a bad boy, but I’d need to work my way up to that. At first, I tied him up and teased him right to the edge. After all, I’m a cock tease. I went step by step, making sure to use my lips and my tongue. Slowly, I brought him almost to his peak but didn’t let him orgasm, one time after another.

Then, I got mean with it.