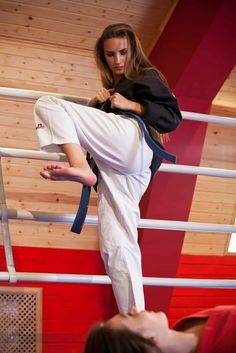 Warming Up At The Dojo

Karate foot job — I was in the dojo for the Thursday night class, warming up and stretching my legs and feet. I saw Mr. Degamo staring at me for some reason. I looked over, and it looked like he was staring right at my feet. Maybe he noticed my fresh pedicure? My toes were a soft petal pink, freshly scrubbed and polished.

“Oh, I’m so happy to see you returned this week, I wasn’t sure that you would,” he said in a deep voice that took me a bit off guard. I didn’t even realize he had noticed me last week and I was a little embarrassed as I definitely had not been at my best at that first class. “Yes. I promise I will do better this week” I stammered, still thinking about the baritone that was still resonating in certain sections of my body.

Kicking Below The Belt

During drills, we did roundhouse kicks, side blade kicks, and back kicks. I kept noticing Mr. Degamo looking at my pretty feet. My arches were prominent as I struck below the belt. “Ow!” Mr. Leon said. “Sadie kicked me below the belt!” “You know you should be using honorifics. Sadie’s name on the floor is Ms. Johnson.”

With that, he smiled at me and led me to the center of the floor. “Class! Seiza!” They all obediently dropped to their knees. Mr. Degamo smiled. “Ms. Johnson will now help me demonstrate an important form.” He dropped to his knees, grabbing my foot, and said: “Proper form for a roundhouse kick.” I got excited. Was this going to be a karate foot job?

As Mr. Degamo knelt before me and his obedient students, he looked up at me. I imagined myself as a big foot giantess who would smash this tiny man with my karate foot job. He just smiled and caressed my foot, digging into the soles with his thumbs, running his fingers through my toe cleavage…

“This is proper form,” he said. “Now, Ms. Johnson, I want you to demonstrate a roundhouse kick on me… below the belt.” With that, he stood up, and I chambered. I aimed for his junk and kicked my instructor right in the nuts. He doubled over in pain and wheezed: “See class, that is the correct way to execute a roundhouse kick. Thank you, Ms. Johnson, you may go back to drills.”

The blackbelts’ faces contorted with pleasure as I worked my small, pretty feet on those large, stiffening cocks. One of the guys got really embarrassed and excused himself to go to the restroom. Whoops, it looks like he ruined his gi! “What’s wrong?” I called after him. “It’s just a karate foot job!”

For more scandalous tales of martial arts and foot jobs, call Your favorite phone sex operator is waiting to thrill you at Phone Sex Kingdom!