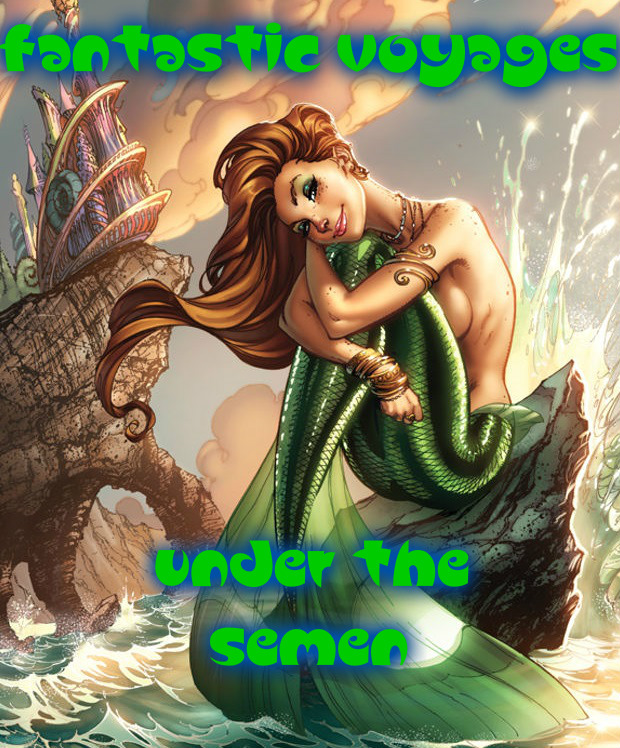 Ah! Semen!  The goo of life. And anyone who doesn’t LOVE semen, has dated the wrong men! You know the expression, “Don’t kill the messenger”? Yeah…. Huh!  Well, not like THIS I’m sure!  All the fairytales we’ve ever heard have some mystery character. Right there on the periphery of every story. Contributing greatly to said story, and yet…not the story. You know? So, in this one, there’s a character we all know, but she’s always misunderstood. Here’s how it goes in her fantastic voyages…under the semen.  The place where all the sucking and fucking goes on…Pardon me? You say the title is the “Fantastic Voyages Under the Sea“?  What? No “men” in it? How can that be? Semen is the center of ALL THINGS, is it not? Warm, slippery, dripping, elixir of life…not central in a story? Nope. Not having it. So, here’s the skinny…

This central, not-so-central character named, Joey, is stranded on yet another island after a thankless rescue of one, Tiger Lily. But, that’s a WHOLE other story…The Captain of the vessel on which she now sailed, was the Indian Prince of the Raja. His name? Prince Dakkar…a.k.a. Captain Nemo. A scientific genius roaming the seas in search of…Yeah, yeah…we ALL know the tales of him searching for sanctuary from British Rule. But the truth is, he was a nasty, sexual pervert. Both loved and feared b his men. He was known as a brutal fucker, taking both pussy and ass with aplomb. He reveled in group sex and exhibitionism and was known to have fucked people to death!

Nemo picked up additional crew to augment his already debaucherous gathering, anywhere he could. Recently, he had picked up some strays on a raft adrift at sea.  On the raft were five men, well in truth a few were almost men…almost. They were a rail man, his Moorish man-servant, a sailor, his protegé and a journalist. A rather motley crew if you ask me! But, also along for the ride, was Joey…remember?

The gang-bangs? Torturous delight. The Cum-shots to the face? exhilarating. Strap-on wearing female crew members? bring ’em on! Group sex had always been part of Joey’s thing anyway, so…But, the one that always stood out, was that perverted fucker, Nemo. Him, with his fucking smoking fetish. Always hanging back on the edge of things, watching, puffing a good Cuban cigar and jerking his fatty, …and it WAS A FATTY! The men of the crew loved getting that hot, hard dick up their asses as much as Joey did! This was an equal opportunity ship at sea, sometimes for years at a clip. They played the best ways they could. Haha

Joey LOVED being under her seaman and wearing, drinking and filling with their SEMEN. LOL It was difficult getting her off..the ship that is! Stay with me! Haha