JOEY LOCKS… THIS BED IS TOO WET! 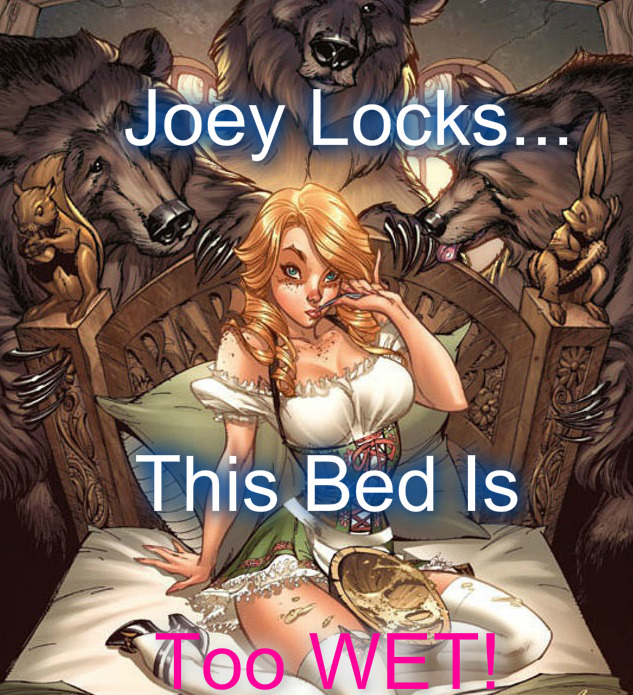 JOEY LOCKS… THIS BED IS TOO WET!

Too wet, you say? Let’s get this straight right now…Just because my hair was dyed blonde at the time the “original” story was written, doesn’t mean my name was really Goldilocks…It was then, and will remain, Joey Locks, and yes…instead of saying “my porridge was too hot”, I did complain that “This Bed Is Too Wet!” We need some unprotected sex games here!

Because of all the things I’ll do…sleeping in that fucking wet spot is NOT ONE OF THEM!  I’ll suck, fuck and squirt ALL over the place, but wet spots??? Nah. Can’t do it! And by can’t, I mean, uh-huh, no way, aww hell no!  I WON’T SLEEP IN IT! No matter how good the juicy pussy, the rock-hard cock, the bouncing young balls, the deeply passionate kisses…My mouth, pussy, and ass LOVE IT ALL. But, I just can’t. LOL   Here’s pretty much how it goes at the home of those three Giant cock “bears” the Johnson Brothers! Time to flip the story…AGAIN!

What IS Too Wet?

Mommy Gets Wet As Well.

Mommy Dearest sent her palace guards to capture and return Joey to the tower cell from which she had fled.  Until she happened upon the cottage of these 3 Bear Brothers. Entering the cottage and found that someone had set out dinner, but no one was around. She decided to taste and as the story goes it was, “too hot”, “too cold”, “just right”, blah, blah…

After gobbling down the dinner, Joey fell asleep in the largest and most comfy bed in the place and awoke to 3 large men sitting around the bed touching and rubbing along her body.  They scared the shit out of her because they were as large as bears! All over 6’4″ tall and built like defensive linebackers.  She sat upright and pulled her knees to her chest, exposing her bare bottom on the bedsheets. They look collectively at her ass at the familiar “gush” of wetness that had originally gotten her into trouble at home.

So, Joey spread her too wet thighs and exposed her pretty little pink pussy and asshole and the brothers moaned in unison. Moreover, they licked their chops like they had found the honeypot of their wet dreams! But, they descended on Joey’s tiny holes with fervor and feasted on her as she writhed in pleasure on their tongues and fingers…And just as she thought she had reached nirvana…They whipped out those majestic beasts called “cocks”. Huh!  There should definitely be a better word for those things!

Her pussy opened in ways she’d never before experienced or imagined. They ground her to within moments of losing consciousness and brought her to that edge over and over, before letting her squirt that pineapple pussy juice all over the cottage. But, they needed plenty of rest to begin the assault anew the next day. However, as they tried to settle in, Joey’s small voice rose and said, “Oh, HELL NO!  So, I’m not sleeping over here…THIS SPOT IS TOO WET!” Giggle

So, Joey decided to stay with her merry men in their cottage in the woods and there’s tell that they are the HAPPIEST MEN in the kingdom…Joey tells me that there are always secrets to keeping it fresh and new…but, she STILL won’t go NEAR the too wet spots!  Haha

Want to know the secrets as described to me?  Call me for the down and dirty…Smooches!