Impregnation By Midnight: How Cinderella Really Got Her Prince ♕ 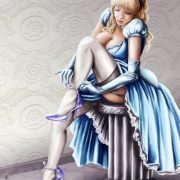 Impregnation by midnight is the true story of how the not so innocent Cinderella bagged herself a prince. Come on now; we are all adults. It’s crystal clear the sweet fairy tale fed to us when we were young was complete bullshit! Out of the whole kingdom, and she happened to have a unique foot size? Come on; I think not. Here’s what really happened.

Fairy Godmother Made A Thot

Our poor Cinderella began to cry over being left out from attending the royal ball, but a magical fairy quickly came to the rescue. Looking at her, the innocent but magnificent Cinderella, a virgin yet to know the touch of a man. Her fairy godmother knew exactly what the young beauty needed to do, to not only attend the ball but secure herself a prince and a one-way ticket out of servitude. With a wave of her magic wand, the young innocent virgin was transformed.

Her ballgown, a dark eye-catching blue, with her breast seemingly one good bounce away from freedom. Golden hair up in a wild bun, her blue eyes sparkled a look that would lure any man—her delicate lips, now full, red, and looking for something to put between them. As Cinderella turned, checking herself out, smiling, her godmother finally presented her with the price she must pay.

“To change your life, there is a task you must complete by the time the clock strikes twelve. The prince, and in order to secure him, you must be carrying his seed by midnight tonight”. The innocence seemed to fade in our dear Cinderella’s eyes as she understood all too well the goal. To reach impregnation by midnight, she must, by the strike of twelve, allow the prince to deflower her.

Stealing Herself A Prince

Cinderella arrived with only a few hours left until the strike of twelve. Her arrival did not go unnoticed; even the family that hated her so were envious. Thinking she looked familiar, they never would have guessed their sweet indentured servant could be this lustful maiden who quickly became the talk of the party. Ignoring the whispers, Cinderella watched her target, the prince, handsome and confident, dancing with another. Smirking, she made her way over, cleverly bumping right into the dancing couple.

Using her sweet voice, she was apologetic while using her body language to scream fuck me, only got the prince on the hook in an instant. He dismissed the other woman and focused the next couple of hours on this new stranger. Knowing it was wrong, he couldn’t stop staring at the curves on her body; the plump breast made it hard for him to not become aroused in front of everyone.

Cinderella’s sweet giggled lured him out of the ballroom out to the secluded balcony to steal more than just an innocent kiss. Hopping up on the banister and lifting up that pretty blue gown to reveal her untouched soft pink pussy. The prince’s cock throbbed, and he could stop himself from quickly undoing his trousers and promptly burying his cock inside Cinderella’s virgin pussy.

As she clung to him, demanding he takes her as his, to plant his seed inside her. Make her a queen, and she guaranteed him an heir. Looking up, she watched as the long hand on the clock tower above hit the twelve, just in time for the prince to give one final pump inside, releasing his seed inside her. She knew that impregnation by midnight was a success.

She told the now satisfied prince that an heir was guaranteed he had all but select her as his wife when the time came in the coming days. A few short days later, the wedding was held. Then as you know, the little slut lived happily ever after.