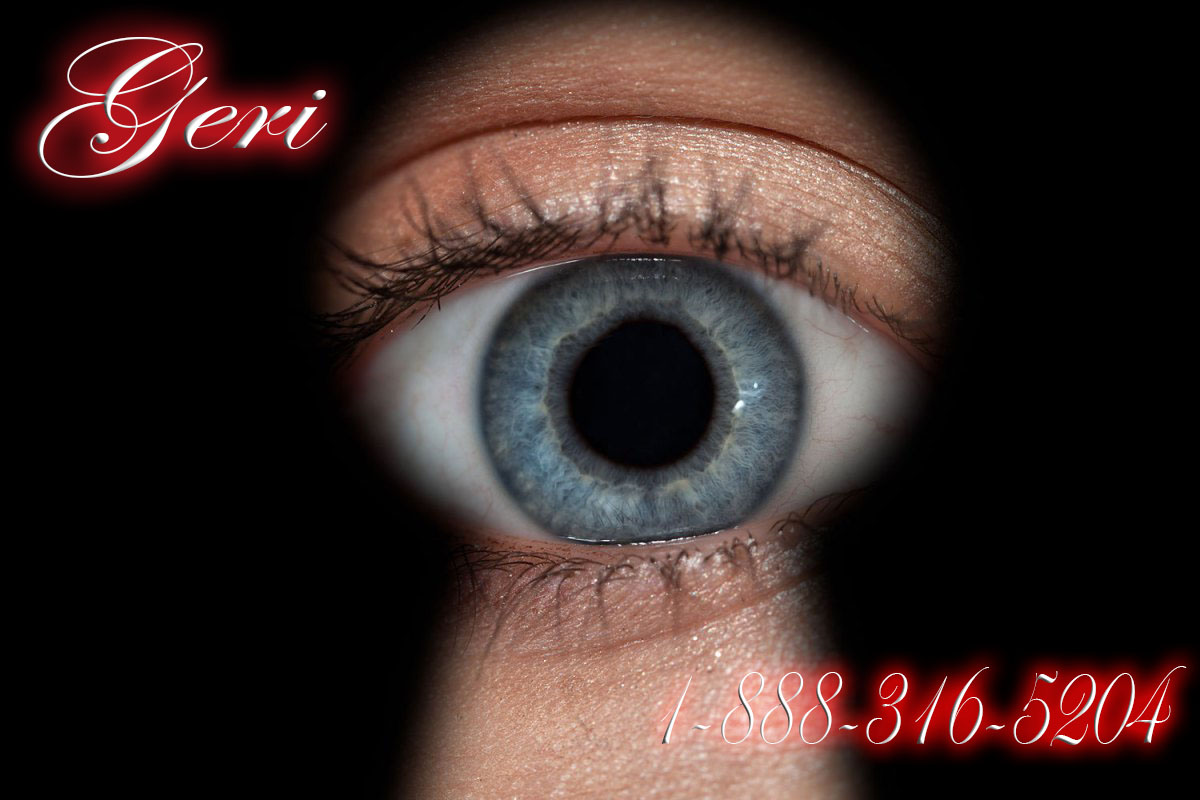 I’m a born voyeur. I love to watch and spy on people, I’m a bit of a peeping tom actually! I stayed at my friend Jesse’s place last night and had the perfect opportunity to satisfy my spying urges when her boyfriend Matt came home, slightly drunk and obviously feeling amorous.

He comes in and plops himself down on the sofa next to Jesse, and I can smell the whiskey on his breath. He grabs at her boob through her shirt and tries to push his hand underneath her bra with a wicked grin on his face. She swats him away and rolls her eyes, looking at me apologetically. “I must be the luckiest guy in Florida, coming home to you two fine ass bitches on my couch.” he slurs, and I can see what he’s hoping for. I get up and fake a yawn “I’m super tired, and I have to work tomorrow so I’m gonna hit the hay.” I say and give Jesse a kiss on the cheek. “Leaving us already Geri? I thought we could play spin the bottle!” Matt says cheekily, giving me a little slap on my butt. ’Not tonight babe, I’m smashed!” I say and make my way upstairs to the guest room. I could of sworn I heard him say “You will be” under his breath…

I turn back from the bedroom and creep quietly back to the top of the stairs where I have a perfect view of the front room and the couch my friends are sitting on. “I wish you wouldn’t keep trying it on with Geri” Jesse says, crossing her arms and turning her head away from him to show her anger. “You know I’m only joking, don’t be such a moody bitch.” Matt says, and grabs her roughly, turning her around by her shoulder to face him. “Look.” He says and she looks to his lap. He has his cock out and I can see how big it is even from the top of the stairs! “It’s not gonna suck itself…” he says, putting his hand on the back of her neck and pushing her face towards his crotch. Jesse begrudgingly begins to suck on his dick, slowly running her tongue up and down the length of his shaft and then begins gobbling hungrily on his fat helmet. He pushes her head down and holds it there, the whole of his erect member in her mouth and I hear her gag quietly, and I know she’s trying to keep the noise down as I’m upstairs.

Matt holds her by the hair and bobs Jesse’s head up and down on his hard cock for a bit, then stands her up and turns her around, slips the straps of her tank top off her shoulders, exposing her big, round fake tits. He pulls down her shorts and bends her over the couch, and she lets out a little moan as he slides his hard fat cock deep inside her cunt.

He begins to thrust into her hard, holding her hips and mashing her pussy against him with every stroke and I can hear his balls slapping rhythmically against her ass and her big fleshy tits swing back and forth as he pounds her faster and faster, until with a long slow growl he pumps his load deep inside her.

Watching this was getting me really turned on, and without realizing I had slipped my hands into my knickers and had been rubbing my clit roughly with two fingers, with the other hand squeezing one of my nipples hard.

After Matt came, he looked directly up at me, smiling devilishly and mouthed the words “You’re next.” My heart jumped into my mouth and I darted from my place on the stairs to the bedroom. He’d known I was there watching the whole time! I shut the door quietly and crept into bed. I was flustered and nervous but at the same time really turned on! I gathered my composure and finished myself off by dipping two fingers into my pussy while I frigged my clit with my other hand. I came and lay there, my mind racing. What did he mean by “I’m next”? After seeing how fat and long his cock is and how hard he fucked Jesse I can’t wait to find out!