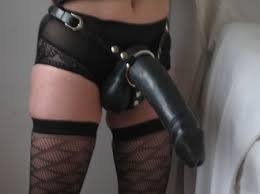 My cute little BBC Faggot loves it when I’m humiliating him, the worse it is the hornier he gets. He loves it when I tell him how small his little man clit is. I make fun of him, and tell him that I’ve seen 3-year-olds with bigger cocks than his. He is such a fucking big black cock faggot also! Every time he calls me, I can hear his big black cock porn in the background. I Role-play Phone Sex that I come over to his house wearing a big black cock, strapped around my waist. I tell him to bend over and spread his faggot ass for me.

Then I lube up my big cock and shove it deep inside of him, the deeper and harder I go the more he likes it. I continue telling him how small his little cock is and what a fucking faggot he is while I’m pounding his faggot ass. I make him tell me how much he wishes he could have a cock like mine, and how good it feels in his tight little faggot ass. He calls me his mistress and never tells me no.  The one time he did tell me no I took my bbc out and smacked him really hard across the face with it! My bbc left a very sexy mushroom tip bruise on his face for a week, that’s how his faggot ass got exposed.

Too bad your baby dick doesn’t match how big of a fucking bbc faggot you really are. If it did you might be able to get a real bbc dick faggot to fuck your ass instead of this fake 10” rubber bbc you make me wear for you. Now get the fuck up off the floor, and go sit in the corner. Your new punishment for Cuming before I told you that you could is that you can’t cum for a week. If you do I will be back and I will cut that tiny thing you like to call a cock off. Then you really will just have a tiny little man clit and be nothing but a fucking faggot forever.