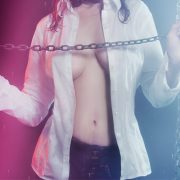 Sometimes, a guy brings a humiliating blackmail story upon himself.

This idiot thought he’d escape my clutches, but all he ended with is a humiliating blackmail story.

We started out in a findom situation. Every session, he came to me on his knees, waiting for me to pay attention to him. I spent the time buying what I wanted on his credit card– software, jewels, even aeroGarden– until I’d spent enough of his money to warrant giving him some attention.

“This isn’t even going to me. It’s going to my girlfriend,” I’d tell him. He’d stay on the floor, hard as a rock, while I simply took in his worthless piggy form. “I suppose you’ve earned enough for a look, today.” And then I’d spread my legs, letting him see my sweet pussy for a moment.

“Thank you,” he’d say back to me. We had a contract, where he’d put all of his information on it– his emails, their passwords, his address. But for now, he gave me his wealth and I spent it on myself.

The pinnacle of our romance was lovely- I bought myself a lot of Lush bathing products on his tab, and I made him stand and wait on me hand and foot while I took a bath. “Isn’t this more than you ever dreamed?” I asked him, and he looked away from me, not saying anything, face red and cock hard.

But, I was young, naive. While I was unmoved by large sums of money he spent, I didn’t realize he would not be unmoved. In summary, he wanted more. Plainly, he wanted to fuck, and I told him no. So, when his card declined on me, I tried to contact him. Nothing. No response.

When I sent him an email, all I got was a statement about how I should have let him fuck me, and how he wouldn’t give me another cent until I did.

That’s not how it works. I saw red. Furious, I went to the contract we’d signed. We’d even had it drafted by his lawyer and notarized. He wasn’t getting out of this agreement.

So, I planned how to crush him.

They both agreed to help me out and be present while I confronted piggie. After all, who doesn’t want to be part of a humiliating blackmail story? They would be present and watch my back if the loser decided to try and alter our deal any more than he had.

After they were on board, I called his work. His boss answered and asked who I was. So, I told him plainly. “I’m the mistress of piggy. And he decided to leave me high and dry. So, I need to contact him about our legal contract.”

The boss forwarded me to piggie right away.

“Why are you calling me here!?” he demanded, panic in his voice. However, I didn’t care. Since he’d crossed me, he’d get what was coming to him.

Making It Up To Me

He showed up to the parking lot in a pretty, lacy dress. Almost a wedding dress, if I think back on it now. It’s very possible he was in his wife’s wedding dress. Whatever. Not my problem, thank you. And he had on his pig ears, as I told him, and attached a little piggie tail to his ass with tape. Finally, he wore heels he couldn’t walk in, stumbling down constantly as he made his way to my car.

My girlfriends and I were waiting for him. First, I sat on the trunk of my car. Next to me, my girlfriends stood, tasers in their hands.

Tears (or sweat?) were pouring from this piggy’s eyes while I took my time saying something. Finally, I spoke. “You don’t back out of a contract, little piggy.”

Trembling, he waited. His thoughts were easy enough to understand. Would I be kind to him, and forgive him? Or would I overlook the fact that he couldn’t pay, and that he owed me my money?

Of course not. I’m a bitch for a reason. This piggie was going to have the most humiliating blackmail story of his life.

“You didn’t pay, pretty piggie. Not even a pig at that point. Now, everybody knows you’re a pathetic pig.” I smiled. “Because unlike you, I keep my end of the bargain.”

“Please, no.” At this point, he was crying on the ground.

“Go for it, girls.” Carla and Meg stepped forward, their tasers crackling at their sides. I pulled out my phone and began to record. “If party A should not be able to fulfill his promise of the monetary agreement held within, party A agrees that party B may have one night of violence with him, and gives party B permission to send a copy of this contract to the following…”

Next, I turned the phone to me. “Hey, Glinda. Your husband has something he wants to tell you about. Maybe ask him why he’s been wasting so much money? Or why he’s not been faithful?” I pointed the phone back at him. Currently, my girlfriends sat on his back and rode him like a pig.  “Ask him why he’s so depraved, Glinda. I recommend divorce, honestly. You and I know he’s terrible at sex.”

Finished, I sent the video. Then, my girlfriends laughed, tasers unused. “Makeup down his face,” Meg giggled.

As piggie begged, I checked my phone.

If you don’t want to be humiliated, make sure you know the terms of your blackmail, piggies. Otherwise, I’ll come for you, no holds barred. You’ll be the center of your own humiliating blackmail story.

Blackmail phone sex up your alley? Then call and worship me, piggy.