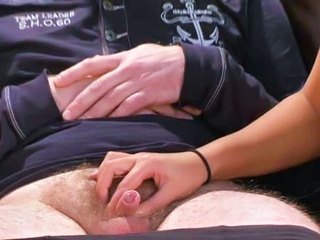 A Baby Dick. That’s what I got stuck with last weekend.

“Oh my God, what the hell?” I said as I laughed. I couldn’t help it; he was freaking small.

Like seriously small, maybe four inches if he was lucky. “What? I’m just a bit smaller than average. No big deal.” he said in a trying-to-be-confident voice. He knew he wasn’t but couldn’t admit it. It must have been so Humiliating!
“Quit lying to yourself Baby Dick. That’s not a little bit smaller than average, that is tiny as hell.” I put my finger and thumb around him and began to stroke him. “Is that as big as you get? Jesus. I ‘m guessing your ex-girlfriends spent a lot of time with their vibrators.
Alan, come look at this loser.” Alan stood beside Baby Dick and laughed. ” Haha, I always wanted to fuck two women at the same time,” he said, joining in the fun. I decided to do a size comparison. I let him go and held my thumb beside his dick. It was hard to tell them apart. I then held my thumb against Alan’s dick. He was huge beside it even though he was only semi-hard.
“See the difference? That’s what a real man looks like.” I put my hand over Alan and started to jerk him off. When he was as hard as he was going to get I stopped. “Wow, you got even bigger. See Baby Dick, yours isn’t like that.”

I let go of Alan and put Baby Dick’s hand on him, then covered it. I forced him to jerk off Alan for a minute then said, “How does it feel to finally be touching a real dick?”

He didn’t answer and I looked at him. Staring at the ground his face was bright red. He was now too embarrassed and full of shame to say anything. “He’s bigger right?” I said and gave his little stub a sharp flick with my finger.
He managed a small nod and I gave him a harder flick, aiming for right on the tip. He gasped in pain then said in a whisper “Yes he is bigger.”
I was starting to get bored of playing with Baby Dick so I grabbed his clothes and threw them at him. “Get dressed and fuck off. I wanna get laid now and I only sleep with real men.” I turned my back on him, grabbed Alan and dragged him to the bed as Baby Dick got dressed.
I straddled him and lowered myself down, my pussy stretching around his dick. As soon as Baby Dick reached the door I moaned loudly and said “Oh God, you’re so fucking big.” Baby Dick quietly left although he probably heard me fucking Alan right until he shut the front door.