Huge Fake Tits — Where the FUCK Did These Come From?! ♕ 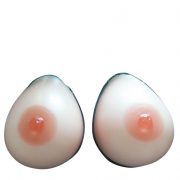 Huge fake tits don’t just grow overnight.  Well, in your case, they did.  As you started to wake up, you felt funny.  You have no idea how long you were out, but your last memories are a haze.  You did remember losing a lot of money.   A LOT of money.  You owed some nasty people more than you made in sixteen years and needed to come up with it fast.  Otherwise, you weren’t going to be around to see next year.  There were negotiations, and you did a lot of begging, too.  Finally, you came to an agreement.  You’d work for them for however long it took to pay them back.

What happened after that is…hazy.

They knocked you out.  You remember coming-to,  here and there.  One time you regained consciousness and remember being pushed on a gurney to an all-white room with blazing bright lights.   Then, everything went black, and now you’re here.  You check to see if you’re dead.  You’re not.  Still, as you rise to form your lying position, you notice things feel a little different.  Your chest feels heavy.  Upon looking down, the mystery of why is answered extremely quickly.

At least, you think they’re that size.  They’re massive and well done, too.  You stare at them in shock, but can’t help doing what any man in your position would do; touch them.  You squeeze and caress them, trying to convince yourself that you’re still dreaming.  But no matter how you grip, grab, and pull on your own sensitive nipples, there is no mistaking it.  You’ve got huge, fake tits now.  That’s when I come in.

“Ah, you’re awake,” I say as I move your hands to inspect my work.  “Not bad, not bad.”  I can tell you’re about to start shouting for an explanation.  I cover your mouth before you can do so.  “Our investigators took a look at what you do for a living.  No offense but customer service isn’t exactly something that’ll bring in the money to our organization.  Not the kind you did anyway.”

I got behind you and started to give your tits a vigorous stress test, teasing them while showing them no mercy.

I pressed them together and sucked on both of your nipples at the same time.  The response was very positive as the one male part of you remaining did as expected.  Despite the situation, you were rock hard in a matter of seconds.

“I hear you owe the big guys a looooot of money.  So much so that adding on a tit job barely put a dent in it.  You’re going to be a special little toy that our clients would pay highly to use and abuse.  Most of the other women here are treated well.  We have rules in place to help keep them safe.  You’re going to be part of the stock that has no rules.  The guys can and will do whatever they want to you…for a price of course.  Hey, it’s better than wearing cement shoes, right?”

You can’t believe what you hear as I continue to knead and suckle on your huge fake tits — for my own sake at this point.  They’re just so fun.

“Since you’re new, they’re going to pay top dollar to rape your virgin little boy-snatch over and over again.  They’re going to stick their massive cocks in between these monsters and pound away until they spray your face with load after load of hot jizz.  After then, they’ll make you get on your knees and suck until you’re throat is a regular cock socket, and they’ll may you drink whatever their cocks give you.  Yea, you’re going to be ‘that’ slut.  But, I’d say in about a year, when you’re all used up and used to the taste of piss and dirty assholes, you’ll be completely debt-free.”

“Wow.  And I didn’t even touch it.  Oh, you’re definitely ready.”  I smirk up at you.  “Depending on how well you do, I might just have to convince the guys upstairs to keep you.”

Are you ready to use those huge fake tits in order to become a no-limits fuck doll?  Call my phone sex line and I’ll put you to work.

One Reply to “Huge Fake Tits — Where the FUCK Did These Come From?! ♕”