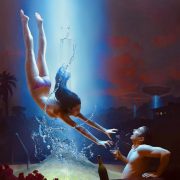 How I became an Alien Sex Slave

I awoke in the morning, the same as always, not knowing by twilight I would become an alien sex slave. Cuddling with my beautiful boyfriend, his warm naked body pressed up behind me.  I loved feeling every part of him as he brushed up against my soft backside, his cock hard, anticipating being inside me. The most exciting part of this routine was his hot droplets of pre-cum on the small of my back, right before he slid into my tiny wet pussy.

I was always able to grip onto his cock so hard I could pull, a trick that drove him crazy. Little did I know by evening that same day, my grip wouldn’t be enough to keep me down and that the lights beaming above us would rip us apart. I cried as I floated above our hot tub, reaching as far as I could to grab him.   I looked up all I could see was white light. The life I had always known faded away around me.

I awoke in complete darkness,

only knowing I was conscious because of the cold metal surface under my naked body. Freezing metal clasps gripped my ankles and wrists sending waves of fear crashing over me. Suddenly, a bright blue disc appeared. It circled my large palpitating breasts and slowly moved its way down my belly, stopping over my thighs. In complete silence, a long, vibrant pink tube emerged from the disc. Snake-like in movement, it undulated up and down, finally making its way to my clitoris. Quietly, a tongue-like object appeared from the tube and began to lick in patterns not fathomable to the human mind. I began to wonder if my new life would be lived as an alien sex slave, or was this just an alien sex dream?

having never felt such intense pleasure. I started to sweat, when all of the sudden a warm liquid started gushing out the tongue as it was licking, covering my inner thighs.  It was dripping down, flooding the cold table underneath me. As I would attempt to push my body off the surface of the table, the liquid clung to me, creating a tingling sensation that calmed me as if it were now part of my body. I no longer wanted to struggle, my fears were diminished, and I became awakened and hysterical of the idea of the pleasure coming to an end.

I had accepted my fate as an Alien sex slave.

My body was shaking, with my eyes rolled back to the deepest parts of my skull. With no warning, it all suddenly stopped, and once again I was surrounded by darkness. As quickly as it became dark, the tube revived to color again so bright it was blinding. Without having taken half a breath, the tube disappeared as I felt it slide inside of me and it shocked me off the table, opening my mouth in marvel with my eyes steadily gazing above me.

As I looked down,

I started to see a pink glow in my belly. My skin getting brighter and brighter to a state of complete translucence. I could see the pink phallic tube, or what I would soon call my new love, moving inside of me. My entire body became a pink glowing light, with rays beginning to beam out of my eye, mouth, and pussy. I opened my mouth as my new bright pink tongue slipped out and stretched down to meet the tube where it had entered me. My tongue wrapped around the tube, guiding it in and out of me, creating sloshes of pink cum spraying outward, like comets in the night sky. I was vibrating so quickly and intensely;

it was as if I was a bell that had been struck by a hammer.

I looked down towards my feet only to discover a strange shadow slowly creeping towards me. As the object reached my pink glow, I could see what appeared to be long, black fingers approaching me. Still, in complete silence aside from my own vibrations ringing in my ears, I looked up, shocked to see a tall black body with no face.  After staring at it for only a few moments, its own long pink tube slid out from behind it and entered my mouth. The taste was a new flavor, as unreal as it was unearthly.

As soon as my taste buds were touched,

I started to see flashes of events unbeknownst to be, seeing myself in a story I had never lived, but still somehow felt familiar. I saw myself going through the same memories over and over,  chained up, with countless faces.  It was then I realized I had always been an alien sex slave. When the flashes dissipated, I noticed new smells around me, and then flavors in my mouth. The once silent space I was in, suddenly became a melodic surrounding.  As I opened my eyes, the space became lit with sunlight and amongst me were a thousand more faceless black bodies.

For out of this world phone sex, give me a call.