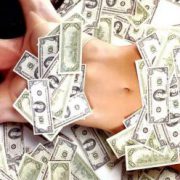 Vegas has more than its fair share of hot sex stories

Vegas has more than its fair share of hot sex stories. I myself had one there recently. I went there with some friend for the weekend and had some unexpected adventures. We were at the casino one night and this good-looking man approached me. He asked if I’d be his good luck charm at the roulette table. I went along as a lark. He won. He kept winning time after time and he said it was because of me. And  He won a staggering amount of money and invited me up to his room. It is so not like me to go along with one night stands or strangers. Somehow I wanted to though, so I did.

We Were Getting High And Having A Great Time

He tossed his huge amount of winnings on the bed. I laughed and said it was just like in the movie Indecent Proposal. He pulled out some weed and lit up and offered me the joint. I took it and we had a lot to drink as well. He pushed me back on the king-sized bed full of money. It was a very sexy moment rolling around in all that dough. I was feeling the effects of the weed and the booze and the room was kind of spinning. Like the roulette wheel, I said, lol. He stripped me down and said I looked beautiful laying on all that cash. This was going to be another one of my crazy sex stories.

It Was Kind Of A Surreal

He was as hard as a rock standing at the edge of the bed. I beckoned him over and took his dick into my mouth and deep-throated it. He put his hand on the back of my head really pushed it down, gagging me. I slurped away on it and he then withdrew it from my mouth and moved down to my waiting pussy. I opened my legs wide for him and he entered me. Pushing in all the way up to the balls. He really drilled my cunt. With the weed and booze, it was kind of like a surreal sex dream. I’m sure this very room, every room in Vegas probably, had lots of hot sex stories take place there.

He Was Happy To Have Won So Much Money

It’s just not like me to throw caution to the wind, but it was so much fun. I know I wasn’t the one to win the money, but it was like a high of some kind. My pussy was getting the rewards. He was so happy to have won so much money, he was really aiming to please me. Make sure his winning streak continued in the bedroom so to speak.

He was doing a good job. I got on top of him and began to ride his large cock. I was rotating my hips to grind on him. My clit rubbed against his dick and I soon came in a gush all over his shaft. He thrust upwards a few times and filled me. He squeezed my tits and playfully slapped my ass. I rolled off of him and asked him how he was going to spend the money. He said he wanted to give me a little something, so he handed me one of the wads of cash. It was a nice bonus on top of everything else. What a weekend!

Call Me for some hot phone sex!