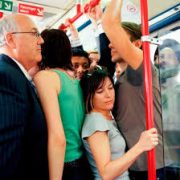 I had this boyfriend who taught me all about hot frotteurism.

He told me that this activity of hot frotteurism that he engaged in took place in public. That was the most important thing. It needed to occur in public, and it needed to involve an unsuspecting person. Before I participated in these acts with him, he acted alone. One day, he confessed these acts to me in hopes of sharing this fantasy. I, of course, love to try everything, so he felt like he could easily come to me. I am a rather wild girl. One day he sat me down and said that he really wanted me to try something with him, but I had to promise I wouldn’t stay mad if he told me.

So, I promised. He told me, hesitantly, that when he was in close spaces with strangers, all women, he enjoyed pulling his cock out and jerking off onto them. He would also grind up against them, wipe his cum on them, or just rub his cock all over them. This definitely piqued my interest. When I asked, he told me that the places included; buses, elevators, trains, airports, lines, concerts, festivals, light rails, and any other closed or confined space. How interesting. He told me that he wanted me to participate. This confused me. I told him that I had little faith in his plan working, not because I had no desire to, but because I lacked a cock to rub onto anyone.

He informed me that his fantasy occurred a tad differently.

He explained to me that he wanted me to pull his cock out and press, wipe and jerk it onto an unsuspecting girl. This definitely interested me. I asked how he hid it, and he told me that jackets help, but the environment must be crowded. Also, one must inch as close to the stranger as possible and stroke with minimal movement. Imagine being discovered by both the stranger and the other individuals in the crowd.

After I felt confident about the technique used, we created a plan. Our destination of choice was the town light rail. It was the busiest area that we could think of. This was important due to the fact that there were two of us trying not to get caught and not just one.

We traveled downtown and bought two tickets for the light rail, then hopped on. It appeared more crowded than suspected. We took turns discussing who looked hot, weighing our options. Finally, I found the perfect one.

She was this barbie doll looking blonde. She looked straight out of a sorority. Her legs were so long and thin, tucked away under a short, pink, ruffly skirt. She wore a cute blue little crop top that exposed a crystal, dangling belly button piercing. My boyfriend and I approached her and drew in real close to her. I slowly unzipped his pants and pulled his cock out. His hard-on was still tucked under his shirt, entirely out of view.

I slowly untucked it and hid it between my boyfriend and this girl’s bag.

I grew more and more excited and could feel my heart pounding. Pressing the tip lightly to her shirt, I stroked his cock. I stroked in long steady strokes so that no one would suspect anything with my arm moving.

I looked down to see a tiny stream of precum drip out. It landed on her skirt. With more enthusiasm, I stroked as discretely as possible. My boyfriend put on a great performance, trying not to breathe wrong or move wrong. He stood there frozen, with a clenched jaw and no other indication that we were misbehaving.