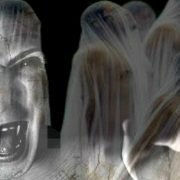 Time for another installment from my time in captivity as a Horror Porn Outcast from Hell. I was a demonic worship prisoner and oh, the things they did to me! I woke to the feeling of his filth covered-hands slapping my face and turning my head violently from side-to-side. Wanting nothing more than to be in my own house.  Free from violence and happy again only to be awakened by my tormenters. He squeezed my face, then ran them over my tits. And that’s just when I realized, I wasn’t alone in my terror. There was another woman hanging from chains like mine and she was right next to me screaming her own terror-filled yelps.

The molestation was worse than any mammogram I’ve ever experienced. He squeezed our tits as if they weren’t real and might be ripped from our bodies. Suddenly, there was a stench that mimicked that of rotting flesh and death. And I heard a deep and guttural sound coming from behind us as we were being released from the chains that bound us to the ceiling.

Fear had never been this real for me before. However, my take on the unknown had always been to just not fuck with it. I turned my head to get a look at what monstrous thing made the noise. And all my thoughts on demons changed, forever. I was down for some ritual sexual practices. And, there, right behind us was a being of horror. It was demonic for sure. And it clearly was here seeking a demonic worship prisoner to rule over and fuck to death. All I remembered was hiring on for a feature horror film on what it’s like to be a demonic worship prisoner. Now, I awakened to a real-life terror.

The first to go was the girl next to me, but I was too afraid to even try to help her. I backed against a cold cement wall screaming in horror. It yanked her behind a wall and slurped at her as she screamed. It seemed like only seconds had passed when I heard him slither across the floor toward me. I looked away, but the stench came before him.

Would I submit to being a demonic worship prisoner?

I prayed not. But, a girl will do almost anything to stay alive, right? The fear was REAL and I started to tinkle down my inner thighs. However, that seemed to turn the beast on more! The guard retrieved what was left of my cellmate and threw a chunk of her flesh to my feet like bait. It emerged again to gobble her down, then set its sights upon me. He dragged me into his lair, but instead of ripping my flesh apart he started licking my pussy and sucking me. His forked tongue was like a sharp knife going into me.

His jagged fangs pierced my lips, so I tried to calm myself. If there was a way to survive this ordeal, it would be with a clear and calm mind. He flipped me over and licked my asshole, which made him more ravenous. He licked, then bit my hair in the back of my head Yes! You heard me! He BIT my hair. I felt it rip from my skull, but still, I calmed my screams as much as possible.

He forced his dick into me and that seemed to calm him too.

Can I tell you a little secret? His throbbing dick actually felt kind of good! Certainly, I am aware that makes me sound like a total whore, but I won’t lie. He buried that other-worldly dick deeper in me than anything I had felt previously. I stopped understanding when my screams of pain to those of pleasure, but with each demonic thrust I felt my hips swirling on that beastly dick and I rode him (it?) hard and deep.

Well, let’s just say it’s somewhere BEFORE the off-ramp to being a demonic worship prisoner! I repeated over and over to myself than I really needed to survive the onslaught. Of course, I thought there was just ONE of them. Why is nothing simple about my sexual vibe? They say you get back what you put out into the universe. And trust me… I put out! A LOT! Just not to demon dick. There’s a first time for everything. One demon finished with my pussy, then out from that same wall came another, more vicious-looking demon. This one had a dick like a baseball bat, but as thick around as a soda can and I felt my fear levels rising again.

I had plans on portraying myself as a demonic worship prisoner, that’s for sure!

I didn’t roll over for men. No matter where the hell they came from! So, I did as before and rode that long, hot dong all the way to hell and back and if I was really lucky, I’d ditch his ass there! I know. I know. Are you aching to hear what happened when I was attacked by the bigger, badder dick? Well, there’s so much MORE where that came from. Call me. Maybe you can be the take-down specialist I need. I’ve taken on demon dick, so, you might be hard-pressed to make me scream or cream. So, if you’re up to it, give me a roll! If you wanna gave demonically hot phone sex. The buck definitely stops here!