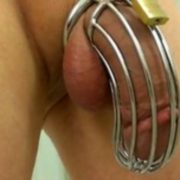 I helped him out of his jeans.

His massive erection was immediate.

Moving closer to him, I hitched my skirt up and brought my leg up on his erection.

The smooth top of my soft hip showed, and the seductive visual followed by the sensation of silky skin traveling over his sensitive shaft made his eyes roll back into his head then flicker shut. The noises escaping his lips were absolutely seductive. I continued this for a few moments until I was sure he couldn’t take another second, or else those balls would release their weeks’ pent-up frustration. Bringing my leg back down, away from him, and relishing his moans, my other hand reached for his cock. He had opened his eyes when my smooth hip left him. He watched my hand reach for his cock. The thought of me giving him a hand-job elicited another whimper and back-arch from my horny little pet.

Instead, I teased with just the slightest touch of my fingertips.

Leaning over him, I moved my face close to his ready, throbbing cock.

My smooth fingernails moved away from his balls to just underneath, with the gentlest touches against his taint. Undoubtedly, he could scarcely believe his luck as my mouth approached his cock. Was his Mistress really going to? I blew gentle breaths over his exposed cockhead. I could see his balls readying themselves for the release. Just three more hot breaths from his Mistress’ cruel mouth directly on his strained muscle was all it took. He let out a divine and lengthy wail, I moved my head up just in time.
“Oh, my horny little pet. What an absolute mess you’ve made! Now clean it while I lock you back up.”