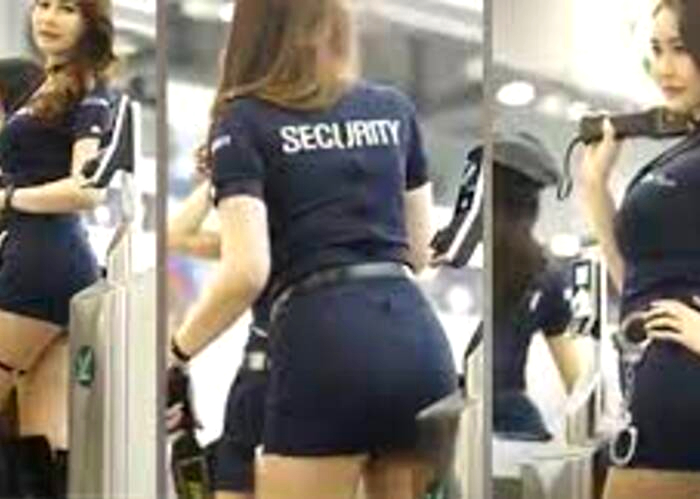 When it was my turn to show my passport I couldn’t find it anywhere. A uniformed official pulled me out of the queue and led me over to an office. I tried to explain that I’d left my handbag on the plane. He refused to believe me and called a female security officer into the room. She took me into another room with no windows and a long table in the middle of the floor. Two more women officers came in and an English-speaking one asked me if I had any drugs on my person. “Certainly not!” I replied indignantly. She gave me a long slow look up and down, that lingered on my chest, then quietly replied “We’ll see…”.

When the officer told me that it could happen here – or at the town jail – I reluctantly agreed. She ordered me to take off one item of clothing at a time, carefully checking it for contraband. Two minutes later I was standing there in just my bra and panties.

Reaching out, she suddenly squeezed and fondled both my tits, asking if they were real or if I had implants. I was shocked but didn’t push her away. She smelled of soap and cheap perfume and I could feel her hot breath on my face. “Now take off your panties.”

Frozen to the spot, I couldn’t move.

The official hooked her thumbs into the waistband of my knickers and pulled them down in one smooth movement.

Their boss had a tube of gel and was working a thick globule onto her fingers. I tensed as I felt her fingertips probing and exploring my lips then closed my eyes as I felt her forefinger push inside me. I moaned as she fingered me, working another digit inside. It took her a few minutes to get my tight pussy wet enough to take a third finger.