Hockey Game Gang Bang: I Got My Goal! 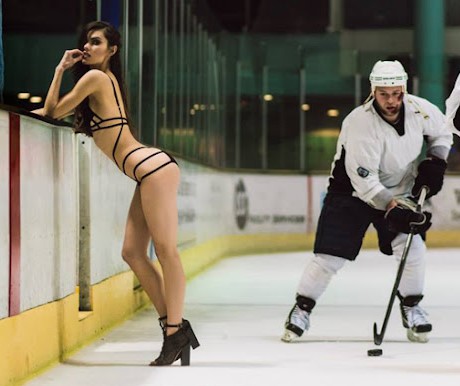 Who knew my first game of the season would end in a hockey game gang bang?

Okay, I admit – I’m not much of a sports fan.  I’ll watch a football game here and there with the guys.  And I’ll go to a baseball game in the summer just to sit outside and drink beer.  But other than that, I don’t pay much attention to sports. Except hockey! There is something so exciting about hot guys on skates body checking each other into the glass;  it makes my panties soaking wet! So, naturally, I was all for it when my girlfriend told me she had front row seats to the game.  I was also all for it when the opportunity for a hockey game gang bang came up!

It all started with some innocent flirting

We got to the game and through security, making our way to our seats right before the National Anthem.  Decked out in our team’s attire, of course, both of our jerseys were skintight with deep Vs showing off our cleavage.  It was so cold right on the ice, our nipples were rock hard poking through our shirts.  As the guys lined up, I could see some glance our way.  My girlfriend started chatting with the guy next to us.  Turns out, his brother was on the team.

I started fantasizing about a hockey game gang bang

As soon as the game started, our team was skating well and playing great.  A few times, bodies hit the glass in front of us  and I couldn’t help but get turned on.  I thought about what it would be like for me to be pushed up against the glass  with a nice hard cock pounding into me.  Maybe two hard cocks.

I heard the man next to us ask my girlfriend if she and I wanted to go down to the locker room after the game and meet a few of the guys.  My ears perked right up!  As soon as she said yes, it was all I could think about.  Right as the buzzer went off, I was up and out of my seat.  Our team had won 4-1.  So everyone was in high spirts.

We made our way down to the locker room

And it was like every wet dream possible for me.  Half-dressed men everywhere.  Some of them getting in and out of the shower.  Others just sitting on the bench shirtless talking about the game.  After being introduced to a couple of the guys, I realized they were just as excited to see us as we were to see them.  I sidled up to the goalie, put my hand seductively on his arm, and complimented his great saves throughout the game.  I saw my girlfriend being led away by the assistant captain.

Soon, it was just me and four of the guys

Most of the guys were showering or had left for the night.  I was flirting pretty hard and hoping they were thinking of a hockey game gang bang just like I was.  When I boldly reached down and rested my hand on the goalie’s crotch, I knew I was in luck.

Next thing I knew, a hockey game gang bang was happening

I dropped down to my knees and took his cock in my mouth.  Soon, his teammate was standing next to me, his hard cock in his hand.  I went back and forth between the two of them, sucking their dicks and stroking them.  Suddenly, I felt hands around my waist. Next I felt my skirt being lifted up and my panties pulled down. Almost instantly, I felt a big hard cock push into my pussy.  After a few thrusts, he pulled out.  And another cock filled me.  Soon, I was swallowing down creamy cum and getting fucked from behind in a rotation by the other guys.  I will never look at hockey the same again.

Want to hear more about my hockey game gang bang?  Call me for some hot phone sex!