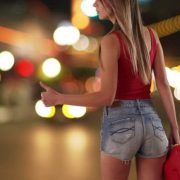 Do you know of a horrifying, but hot hitchhiker sex story?

There have been many scary sex stories online. My deepest darkest fear is getting stranded on a road late at night and having to stand there in the dark asking a stranger for a ride in his or her car. You never know if it will turn into a hitchhiker sex story.

One night I was lounging at home under my blankets. I had plans of watching scary movies and pigging out on some tasty caramel popcorn. Suddenly, there came a loud knock at the door. Slowly, I went to the door and peeked through the peephole into the night. My friend Beverly was there crying.

What brings a hysterical woman to my door at this hour?

Composing myself, I came back to reality and opened the door. Beverly was shaking so hard and weeping. All I could do was hold her and reassure her that everything would be all right. After a while, Beverly sat down on the couch and told me the hitchhiker sex story that happened to her daughter that night.

Beverly has a beautiful daughter named Christina. I have known Christina since she was in diapers. Moreover, Christina had a lot to look forward to. She was amazing to look at. Her eyes were sparkly blue, she had a petite body, smooth legs, and the sweetest, almost too trusting, personality.

Listen to this hitchhiker sex story…

Christina was not a bad girl at all, but almost too trusting. She loved helping others any chance she could. So, earlier tonight she was driving home. Christina had gone over to a friend’s house to cheer someone up. Christina and her mom are extremely close. So, anytime she was leaving late at night she was good about calling her mommy.

On the way home, Christina’s car was running low on fuel, so she popped on over to the gas station. The gas station was still about forty-five minutes away from home. When she parked her car, she happened to notice an odd couple next to her. They seemed to be glaring over at her and watching her every move. However, she convinced herself that she was imagining it, so she shook it off.

Watch your back girl!

After all, why would a random couple be staring her down? She had never met them in her life. Christina had gone to this gas station on many similar late nights without incident. A quick step inside the store and then to her tank was all it took for her to be distracted.

What she didn’t know was that when she was inside, the woman put some nails under her tires. The evil woman got back into her car with her husband or man. They drove off, but they would soon come back. This is where this hitchhiker sex story really beings.

An evil couple working together to lure in girls.

Back on the road, Christina got an alert that her tires were running out of air fast. She parked the car on the side of the road and immediately put on her hazard lights. Next, she called a towing company and they said they could send someone out in one hour. After hanging up the phone, a car pulled up behind her. It was the car with the eerie couple.

The woman came over to the car and asked Christina if she needed any help. She tried to offer her a ride, but Christina politely refused. Just then her husband came up beside the car with his truck and boxed her in. He got out and grabbed Christina roughly and started to drag her to his truck. Apparently, this woman was the evil but cunning sexy accomplice that would assist her husband in finding stranded girls.

Oh, the evil things they made her endure!

His wife forced Christina down to her knees and made her take his cock out of his pants. Then, he made Christina suck on his dick while he face-fucked her hard. Gagging and gasping, he still thrust hard down her throat. He instructed his wife to pull Christina up onto her feet and bend over. His wife forcefully spread her ass for her husband as he started to forcefully fuck her tight hole.

So much more happened in this hitchhiker sex story that night. It’s so twisted we need to discuss this on your very own taboo phone sex call. I’ll be here waiting.