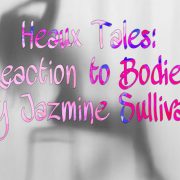 Heaux Tales is a new album by Jazmine Sullivan.  The Intro is entitled: Bodies.  This song plays, and it is as if I was a church girl back in devotion service.  I closed my eyes and threw my lighter up as if I were in the stands of a concert.  Jazmine took a chapter out of my heaux chronicles in her heaux tale.

Stand In the Mirror & Sing:

Gotta stop getting fucked up

What did I have in my cup?

I keep on pressing my luck

I don’t know where I woke up

Bitch, get it together bitch

You don’t konw who you went home with

You went home with again?

Was he a friend?

My mama wouldn’t like it if she knew about

All my rendezvous and all my whereabouts

Yeah, you getting sloppy girl

Yes!  The heaux tales of every college girl, every party girl, and every heaux that didn’t necessarily need anything in her cup to let out her inner inhibitions.  My momma always told me to use what I’ve got, live, have your fun while you can.  Now my step-grandmother is an entirely different breed.  She would have told me that’s why folk should marry young.  So that when your heaux phase hits, be sloppy drunk in the comforts of your own home, screwing your husband; not random guys.

Bitch, get it together!

All heaux’s have a story to tell. Bodies on Bodies sounds like a murder scene.  Have no regrets.  Be a heaux.  Be a good heaux.  I’m a good heaux that knows this pussy gets murdered time and time again.  Pussy Monsters are everywhere.  I’m no victim, I just love to copulate.  Drunk sex is the best! Live to tell about it in your heaux tales?

The next morning, your pussy will tell you if he was a four or a ten.  Do you feel a release of frustration? Or do you feel as if you have been hit by a car?  That might be the dehydration from all that alcohol and compulsory orgasms.  ‘What the mind forgets the body remembers.’

Don’t listen to me, I’m in Pussy Witness Protection.  The guys should be scare of me.  Tap in and let’s see who survives to tell their heaux tales in a phone sex chat with me.