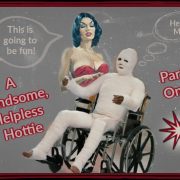 It had been a very bad week.  Maybe one of the worst ever…

I remember thinking that on Monday, anyway.  Little did I know that by Friday, things would be so much worse.   Definitely the worst ever – a truly terrible week.  Well, what happened, you might be asking?   I’ll start with Monday.

The week started with my landlord telling me that he was evicting me from my apartment.  One too many wild sex parties, I guess. My neighbors are such prudes. They would have had a lot more fun if they had joined us instead of complaining about it so much!

Finally, it was Friday.  I had planned to spend the weekend looking for a new apartment and I was eager to get started.  At about 4:55 PM. my boss called me into her office. I knew something was wrong as soon as I walked in and saw the head of HR in there as well.

They explained that today would be my last day. Too many wild sex parties in my office, I guess. Haha – not really. They just laid me off.  So, by Friday afternoon I had lost my apartment, my boyfriend and my job.

I told you – it was a truly terrible week!

By the next Monday, I was staying with a friend and looking for a job.  My employment counselor said that she had the perfect temporary job for me and that I didn’t even need to interview for it.  Because of that, I thought that it must be in my previous field.

But why was I driving into a residential area? The address was for a large house with a huge, beautiful yard that seemed very familiar.  I had a strong feeling that I had been there before. Extremely confused, I parked in the driveway, went to the door and rang the doorbell.

I knew I had been there before

A guy about my age in a medical type uniform answered the door.  He said that Mr. Buckingham was very excited to meet me.  All of a sudden I realized where I was!  Mr. Buckingham was the handsome CEO of the company that had just asked me to leave.  And I had been here before for one of those ridiculous, corporate mandatory fun family days.

But didn’t he have a beautiful, blonde wife? Where was she? And hadn’t he just been in a terrible skiing accident that left him with two broken arms and two broken legs? If he was a handsome helpless hottie on extended medical leave, why was I here?

The medical guy introduced himself as Sam and led me to a large sitting room.  In there, sitting in a wheelchair, was Mr. Buckingham. He was in pretty bad shape with four broken limbs, all in long casts.  He introduced himself by his nickname, “Bucky.”

I put out my hand to shake his but awkwardly pulled it back when I realized my dumb mistake.  It was clear that although I knew him, this handsome helpless hottie had no idea who I was. And he definitely didn’t know that I’d had a crush on him ever since I started at my previous job.

Even while completely incapacitated, he still had that commanding, subtly dominant presence.  He explained that his bitch of a wife had no interest in taking care of him and went on an extended trip to Europe without him.  He needed a live-in caretaker, mostly to feed him, bring him things and look after him.

Sam came over every morning to do all the medical stuff, so I wouldn’t have to do that.  It really seemed that a well trained golden retriever could easily meet the rest of his needs.  Even as I asked him why he thought I was perfect for the job, I knew exactly why. He hadn’t taken his eyes off of my big tits and my nice round ass once since I’d been there.

It seemed that he just wanted a hot girl to cater to him and entertain him 24/7.  At first, I was a little offended but then I thought that this could be a really sweet deal.  I’d have a free place to stay and I could have a lot of fun with the helpless CEO!

Just exactly what kind of fun can a hot girl and this handsome helpless hottie have?  And will he ever realize that he’s hired someone that he just fired?   Also, observant readers might have noticed that this isn’t the first story I have written that features a handsome, sexy CEO that I have a crush on.